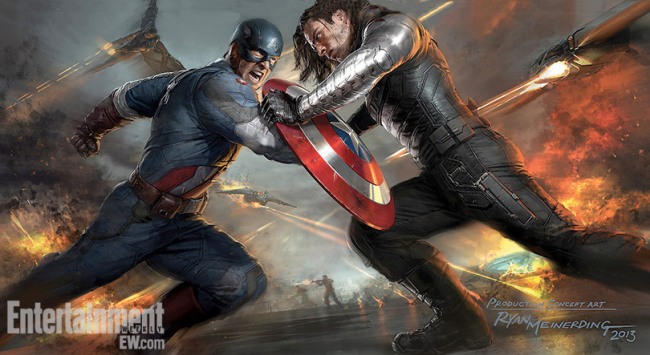 What a fun fun movie this was!! It really was…I mean fast-paced, energy galore, some new characters all added up to make this movie a great ride.  Now if only they didn’t cast Scarlett Johansson in it. :O  She is seriously one of the most boring actresses out there..and no different in this movie..SHOW SOME EXPRESSION SCARJO! (she says she hates being called that soooo).  I mean it’s the same acting job in this as ‘Lost in Translation’ (which I actually liked) and every other movie inbetween.

But to the movie, Chris Evans (Capt.America/Steve Rogers) really goes after it this time around. It’s a solid superhero performance that to be honest, I wasn’t expecting and enjoyed it immensely along with a new side-kick ‘Falcon/Sam Wilson’ *Anthony Mackie) whom I also really liked.  They created Falcon/Sam’s backstory quickly enough to let you know where he was from and where he was going, to make him completely like-able and believable.  And yes, Emily Van Camp has a small, albiet decent role here also, and no one in this movie is going to win an Oscar here or Best Picture etc.. it’s just fun and entertaining, again, what more can you ask for!

And not sure about you all, but for me, the bad guys are always some of my favourite characters if done well and they were here.  I mean Robert Redford as your main bad guy!! How can you NOT love that??!!! I mean come on now!! 🙂  Frank Grillo aka ‘Brock’ is always a good character bad guy, but my 2 favs were by far Georges St.-Pierre (Georges) and hands down Sebastian Stan (Bucky!!!!/Winter Soldier).  They both had Capt. America rockin’ & reelin’ and when you found out who Winter Soldier really was, well it really was emotional for all.  I thought the ending was well thought out and made it so yes, we do know that another Capt. America movie will be coming to theatres in oh..say 2015 sometime…And I only hope it’s as likeable as this one was.. if only we could minus out Scarlett Johansson. *sigh*