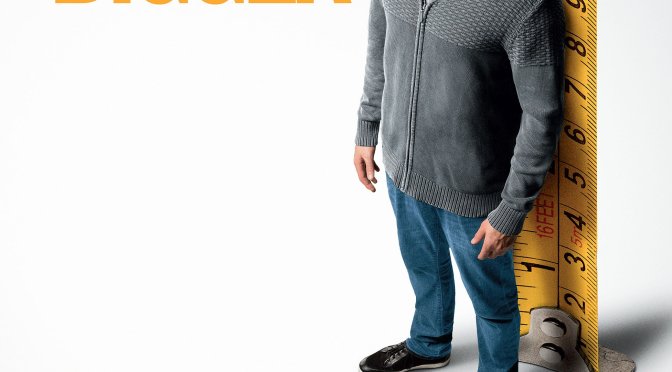 Welp. we’ve got a strike three for Matt Damon on his 2017 films with “DOWNSIZING”. This movie takes an interesting premise, “What if we could make ourselves smaller to use up fewer resources and save the planet?” and really just does nothing with it. Having heard little about the film aside from its concept, I went into the screening fairly cold. Sadly, the film doesn’t have a whole lot more to offer than its brilliant concept and exceptional first act. I must admit that I left feeling disappointed, thinking they could’ve made this a better movie in many ways. When a film has so much promise and doesn’t exactly deliver on much of it, I feel as though many people would be let down by that.

In this dramedy, which also in part a social satire of its own genre, Downsizing follows a couple Paul (Matt Damon) & Audrey (Kristen Wiig) Safranek, who believe their lives would be better if they were to shrink themselves and be transferred to a new world called Leisureland. This place exists to conserve the Earth and save the environment, as let’s face it, smaller people need much fewer resources. With multiple meanings to the title, this is a concept that sounds incredible on paper but doesn’t exactly translate into that great of a movie. Throughout the first act, I found myself immersed in this world and couldn’t wait to be taken on its journey, but I soon found myself losing interest when political and religious elements began to take over and it started to go very sloooowww. And it’s sad as this is a movie that could’ve done so much more with its premise.

Without giving anything away, there are many characters such as Niecy Nash playing a Leisureworld salesperson, or that of Dusan Mirkovic (Christof Waltz), The Lonowski’s, Jeff (Neil Patrick Harris) & Laura (Laura Dern) or Paul’s good friend Dave (Jason Sudeikis), that come in and out of this film in a heartbeat, pretty much leaving them in the dust, when in reality they were actually interesting and added a layer to the overall story. It felt as though Director Alexander Payne wanted to focus so much on the idea of the Downsizing concept, that he sidelined quite a few characters along the way. His films have always been about characters, and while Paul and Ngoc (Hong Chau) share some great chemistry throughout this film, it’s hard not to wish that all of the characters throughout the first act were present throughout the entire film. This was a very curious issue I had while watching and definitely upon reflection. 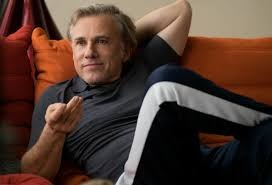 As soon as you’re brought into this other world that has been built for those who shrunk themselves over the years, you will find yourself kind of transfixed at how interesting the visuals are and how lackluster the comedy is, but what you don’t expect is for the film to take a dramatic turn and really have you thinking hard about the world we live in and whether or not certain lines of dialogue are true about society in general. This is an eye-opening film in that regard and the third act is incredibly ambitious, but I just don’t think it really sticks the landing that it strives to achieve.

In the end, this is one of the most original ideas I can recall in recent memory, but an idea doesn’t make a film great. It’s the film itself that needs to win you over as a whole, and Downsizing just didn’t do that for me. On many accounts, this is a very impressive movie from a technical standpoint and it takes risks that I didn’t expect it to, but the risks it takes will only work for a few audiences members that can relate to it.

This is a movie that promises a lot and tries to deliver on all of those promises, while also shoving in side plots that make this film too emotionally complex to really be invested in the satirical aspects by the end. I wish this film went through a few more rewrites, because there is a satirical masterpiece of a movie in here somewhere, but it’s just not the product that you’ll be seeing in theatres soon. Downsizing might be worth your time in terms of originality, but I wouldn’t get your hopes up on it being a favorite.

“THE SHAPE OF WATER” is truly the definition of ‘fish out of water’ unique love story. I mean if someone told me I would get emotional at a film where a mute woman falls in love with a fish-man, I probably would have laughed in their faces. As it was, I did. 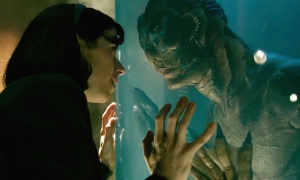 This film has absolutely so much going for it – it’s beautifully filmed, with a magnificent score and a stunning performance from Sally Hawkins. It allows the audience to discover this intimate and fascinating world of “broken” people searching for a moment of meaning. Add in a smidgen of ‘Beauty and the Beast’ with a touch of ‘E.T.’, and you have a concept that captivates you from the start with it’s emotional investment into all the characters. And boy what characters they are. Assembling a first-rate cast, every single actor sparkles as it shows that every character has been developed with great care. From the mute-but-hearing Eliza (Sally Hawkins), who works as a cleaner at a secret government facility, where she becomes drawn to the new specimen: a mysterious marine fish-like man creature (Doug Jones). 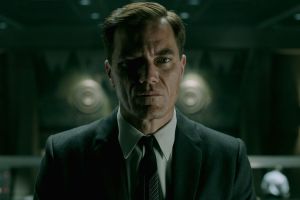 While Eliza begins to fall in love with the amphibian creature, the facility head Richard Strickland (Michael Shannon), steps up to stop it all as his only desire is to take the creature apart for experimental advantage against the Russians. Eliza’s bond with the creature soon begins to affect those around her including her neighbour Giles (Richard Jenkins), and work colleague Zelda (Octavia Spencer). Not only are they the only two who decipher what Eliza ‘speaks’, but are enlisted to help her save her ‘Amphibian Man’. Add to the mix spy/scientist Robert Hoffsteder (Michael Stuhbarg), whom believes so much more can be learned with the creature alive, and you’ve got yourself one of the most imaginative stories that exudes humanity and strength, suspense and love, all put together to provide a great balance and one of the best original stories I’ve seen.

Beautiful from start to finish, like some sort of fantasy, romantic, heartbreaking, emotional lovestory all wrapped up in one, and while not without a few little flaws here and there, “The Shape of Water” was completely beautiful to me. And while other studios are recycling stories or offering up sequels, Fox Searchlight has stepped it up at the end of 2017 here to put out two of the best and most original films I’ve seen in some time. I not only applaud them for this, but hope this trend continues. 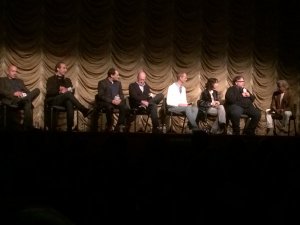 First and foremost – Your Q & A is sometimes highly dependent on your moderator and of all the Q & A’s I’ve been lucky enough to be a part of, he is by far one of the best moderators and truly nice guys out there. His knowledge and deep appreciation for film is felt, along with a great sense of humour. That being said, del Toro is also one of the most amusing, fun guys for anyone to have a chat with. His ease of making jokes, and he makes many, makes it even more fun to be able to get a chance to listen to him, speak and ask fun questions.

Del Toro said that he had the idea for the film and went to a party which he was invited to by none other than Alejandro Iñárritu where he had said to come over and get drunk..about 20 shots later and they all agreed ‘make the movie!’. Then Hawkins launched into how they came about to doing this project together. Upon meeting Hawkins at a Golden Globes party, Del Toro told her: “I’m writing a movie for you where you fall in love with a fishman.” Hawkins replied: “Great!” And with Doug Jones & Richard Jenkins – he pitched it to them while at a sushi dinner!!!
Jenkins laughed that he got his role—of Hawkins’ character Elisa’s lonely, verbose neighbor Giles—when “Ian McKellan called in sick.” For the role of marine scientist/Soviet double-agent Hoffstetler, Stuhlbarg lamented that the script called for him to deliver his character’s most significant scene sans pants.

If the sets looked familiar to any of you – they might, as a lot of them were used from del Toro’s TV show “The Strand” which made it so much easier to keep the budget on a tight leash. When noted
“When I walked on the set I had never seen anything so beautiful in all my life. It was like a painting,” said Jenkins, saying of Del Toro: “This guys speaks in film language.”

The film’s production is even more impressive given its relatively paltry—for an effects-heavy fantasy film—$19.5 million final budget. “We were counting the number of lobsters that we could have on-screen,” said Del Toro. He also teased producer Dale over the removal of one elaborate (and expensive) sequence set at a bus stop. But the filmmakers’ fastidious paid off. Remarkably, the production came in $100,000 under budget.