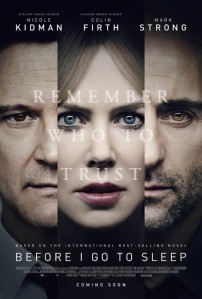 Again, another movie where I saw it about 2 weeks ago but when it’s this bad, I almost feel like not writing a review because they sucked all the energy I had for it just watching!!  For the opening first minutes of this movie all I could think of was “50 First Dates” & “Groundhog Day” except this movie isn’t funny as those. Some even might say “Memento” but you can’t compare that fantastic movie even remotely to this one nor is it anywhere near as good as those even with a cast of actors that I truly like.

“Before I go to Sleep” is billed as a “British Crime Thriller” based on a 2011 novel, which I haven’t read as I try not to read the books before the movies nowadays as I literally don’t want to spoil it for myself.  But all I can say on this one is I really hope the book was better than the film because this movie did not “thrill” me in the slightest.

Basically it’s “Christine” (Nicole Kidman) as a woman who wakes up every day remembering nothing at all because, as she is told by her husband “Ben” (Colin Firth) that she had a traumatic accident in her past.  As he starts to fill in her life for her, flashes of her life appear to her and the minute Ben says “you can trust me” is the minute you know somethings up and it’s not what he’s telling her. Christine finds out she has connected with a “Dr. Nasch” (Mark Strong), a psychiatrist who starts to make her realize all is not what she is being told as she is recording things on a hidden camera as to what she remembers. People pop up like her best friend “Claire” (Anne-Marie Duff) whom she was told couldn’t handle being her friend anymore by none other than Ben himself. 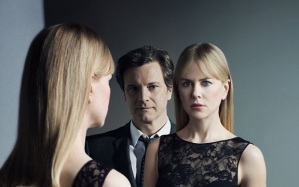 As things start to become clearer she realizes not only did/does she have a son, but as Ben keeps giving her tidbits of her life through his version of it, she finds out pretty much NOTHING is as it seems including the actual realization of is he or isn’t he the real thing. The problem is this could be in some cases extremely suspenseful or thrilling, exciting, scary..you name it, but it’s not. Not one bit of it, Again, not only do you see it all coming, but the way it’s presented to you is agonizing almost in it’s approach. 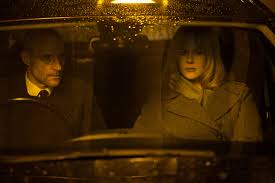 While I’m a big fan of Firth, somewhat Kidman, and definitely Strong, none of them do any type of exemplary performing here which is sad because we all know what all three of them are capable of. The best pairing in the film comes from Firth and Strong, not in their shared scenes but in their common murkiness, showing a bit of the possibility that either could be a friend or foe.