Oh Project Almanac… I was so hoping for a fun and entertaining teen time-travel thriller. What I got was a film that seemed like it was being filmed by a 12yr old with a hand-held camera. Along with a massive headache within minutes, that camera thing got tiresome… fast. And it’s too bad because I really think this film had potential and if you can handle all that movement, which I’ve never liked and you miss a lot of what’s actually taking place because you’re rolling with someone running with a camera while it’s focused on the ground…or the sky… or someone’s head. It’s a shooting decision that adds very little and ultimately distracts from the pleasures of the script and performances. Yeah, not for me. 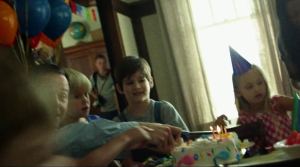 Nonetheless, our nerdy & adorable lead character here “David Raskin”, played with a good dose of wit and charm by relative newcomer Jonny Weston, begins the film between a rock and a hard place. He’s been accepted to MIT but doesn’t get a complete free ride so can’t afford the tuition. While his mom talks about selling the family home to pay it, David starts going through the papers and equipment his now-deceased scientist father left in the attic as his mom wants him to clear out preparing for the sale. He and his sister “Chris” (Virginia Gardner) find an old video camera and after he oddly sees his teenage self in a video from when he was at his 7th birthday party they find, with the help of his child-hood techy friends “Adam” (Allen Evangelista) and the funny “Quinn” (Sam Lerner), a secret set of prototypes and blueprints in the basement, hidden by David’s father. As they begin to build a time-machine on their own, the situation slowly dawns on them and they realize looking at the tape…they’ve already done this. 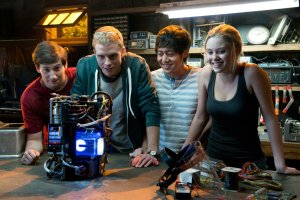 Much like in a horror film where you just want to scream out at the character walking straight into being killed, Project Almanac suggests it’s not so smart to mess with the way things and they should probably in all good thought be left as is. But if that happened, we wouldn’t have a movie here now would we. Especially after David starts going back in time again and again, first to win the heart of his crush and cool girl, “Jessie” (Sofia Black-D’Elia) who just as in any basic teen movie, drops cool status to hang with the nerds and become a time-traveler.

It’s here that our group use their new time travel power to leap through time — so they can see Imagine Dragons at Lollapalooza. With VIP passes no less. I will admit, I would probably do the exact same thing, even now. 🙂 And it’s all done with seemly little damage except to win the girl of his dreams he goes back alone against their own rules, but as things aren’t always as they seem…David has to correct all the damage his seemingly minor meddling with time has wreaked on the fragileness of reality and keeps traveling back himself. Bad move. 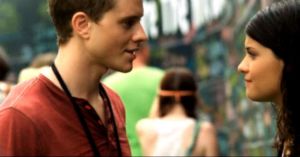 Even with all of the vertigo-inducing hand-held camerawork and special effects magic that goes into the film’s time-travel sequences, it’s worth noting that the characters in it all act like real teens and you believe they really are all good friends even as things start to fall apart some. The premise of this film is great…and had the camera work not induced me to have to close my eyes at times just to stop my head and stomach from rolling, it would have been a really good film. As is, and because of this filming fiasco, I am barely recommending it and only if you can handle this type of filming would I suggest going as it doesn’t stop throughout the movie.