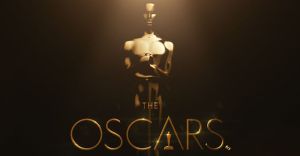 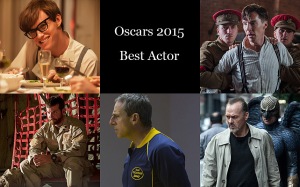 Eddie Redmayne
“The Theory of Everything”
Eddie Redmayne’s performance in this film is what awards are made for. Enough said. I won’t be mad if he wins and honestly, I think he just might pull it off..

Benedict Cumberbatch
“The Imitation Game”
I’m a fan of Cumberbatch’s for some time now. Before Sherlock even he did some fantastic work..anyone ever see him & Tom Hardy in Stuart: A Life Backwards??!! Wonderful film and the message he brought forth about Alan Turing needed to be told.. is it enough to win..no I don’t think it is. 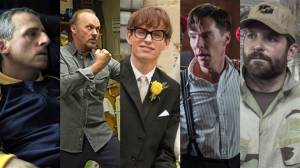 Bradley Cooper
“American Sniper”
Whomever says Bradley Cooper can’t act really needs to see this film. He really embodies this role but I’m guessing political controversy will make it so he is not taking home a little golden man this year.. Though I think it will happen eventually in another role.

Steve Carell
“Foxcatcher”
Was Steve Carell so creepy good in this film? yes he was.. Did he play so against type you wondered at times if it was really him? yes you did. Will he win.. probably not.