As “Samba” – a Senegalese immigrant who has been illegally living in France for 10 years, is the wonderful French actor Omar Sy. For those of you unfamiliar with him, Sy had gotten his start as part of the French comedy duo of Omar & Fred and went on to films with his most prominent being “The Untouchables” for which he won the César Award – touted as the French Oscar – for Best Actor in 2011. In “Samba” he is on form here though possibly a bit more subdued and subtle, a likable guy who just wants to stay in the country (France) as he’s been employed and living with his “L’oncle (Uncle) Lamouna” (Youngar Fall) all that time. 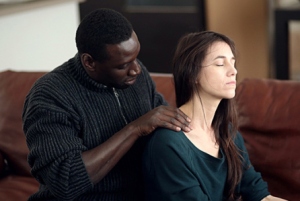 He strikes up a friendship with “Alice” (Charlotte Gainsbourg) a shy charity worker who is more or less volunteering at the immigration center and has some problems of her own which are quite hilariously explained during the film. She tries to help Samba with all his legal paperwork but he is still forced to adopt different names and work in different jobs under the radar of the authorities.

This film is by all means not done as a documentary or political statement. The picture it paints of the French immigration system isn’t too bleak or depressing with some of the other co-workers there offering some of the best comedic outtakes of the film. The characters all have an agreeable warmth to them and as we watch the story patiently play out, you can’t help but feel more charmed by their dilemmas rather than disturbed. Gainsbourg is lovely as the depressed executive who slowly opens up to Samba’s easygoing nature, while Sy invests the character with just the right amount of persuasive nonchalance. Both performers are amusingly supported by Izia Higelin as “Manu” Alice’s colleague and Tahar Rahim as “Wilson aka Walid” Samba’s co-worker and our favourite Arab/Brazilian – who steals a high-rise window-washing, Coca-Cola strip off scene like no other!!!

With Sy being reunited here with the team of Oliver Nakache and Eric Toledano from the 2011’s highly acclaimed The Untouchables who make an unappealing subject engaging and worthwhile that is what makes this completely worth the price of a ticket. One of the better films I’ve seen so far in 2015. Go out and support this film!!

Post Q & A with Omar Sy:
Sy charmingly engaged the audience entertaining us in both French and English – which he wants to learn better and gave far more than most do in these. Sy noted that even though he’s now been in a few big “Hollywood” films such as Jurassic World & X-Men Days of Future Past, he was attracted to the screenplay of this film and loved the way the story was told it being an interesting topic at this time not only in France but everywhere. With his family being from Senegal-though born in Paris himself-he met with a lot of immigrants in France who helped him shape his character here.

Also something new to me at least is that Omar came from comedy background – talking about the excitement of dramatic challenges in addition to comedy.
Re: the challenges of learning English and working here vs France, he is still learning – he advises work hard and never get discouraged. On what he would like people to take away from seeing this film?
“It’s always difficult to say what people have to think, what people have to learn or what people have to see. The goal for us is to take a different look on these people. And if someone’s view is different after the movie, it’s a success.” 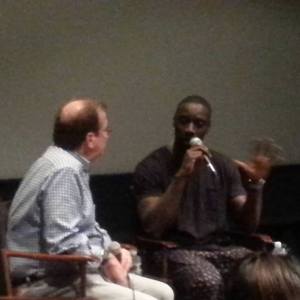