Let’s start by stating the obvious. If you go into this version Ben-Hur with visions of the original classic film, you will be disappointed. It is a very conservative, safe, tale re-told for current audiences. Remember this is being done by none other than Roma Downey & Mark Burnett, sponsors of some of the most cheesy TV shows ever done. And while it’s the ‘cool’ thing to just trash this film because it is a remake blah blah blah.. give it a rest people. 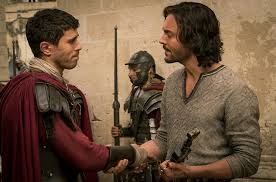 Opening up on this remake/adaptation of the classic epic of Ben-Hur it has mostly the same plot-line as the original. We move on through the tale of the two brothers, Judah Ben-Hur (Jack Huston), is falsely accused of an assassination attempt by his childhood friend and adoptive brother Messala Severus (Toby Kebbell). He survives years of slavery under the Romans and rises from the ranks hoping to one day get his revenge. The storyline is the same predictable one as the 1959 version though some of the dialogue was very modern day, which was a bit distracting, as it took me out of the time-frame of the story on occasion. One of the things that really struck me and stood out, is when they flash the time period it’s set in, you realize just how long people have been killing each other in the name of religion.

The main positive point is the acting as Jack Huston and Toby Kebbell both do a decent job, again, if you’re expecting Charlton Heston, Don’t. Let it go and just roll with it. Morgan Freeman as Ilderim, does voice over and basically phones in his acting performance also. At one point, it’s so completely ridiculous that he’s yelling instructions that would’ve been impossible to be heard over the noise of the race! Add in one other notable cheesy scene for me, is where Judah Ben-Hur is washed up ashore as the only survivor after the ship he is a slave on is destroyed, and I felt like Wilson the volleyball should just make a quick cameo. But to give credit where credit is due, I must say that I did enjoy the spectacle that was the ending chariot race.

The women in the film Ester (Nazanin Boniadi), Naomi Ben-Hur (Ayelet Zurer) and Tirzah Ben-Hur (Sofia Black-D’Elia) all felt really muted. Esther didn’t really feel like a full character for her being the female lead. Add in Rodrigo Santoro as Jesus with the muted group as he’s barely featured until the end. And while I’m not a fan of religious films, they did need to give the character a little more explanation here.

So continuing on with quite the dismal film year of 2016, I can’t say I hated this film as so many of the people who are trashing it just because they can. I will say that the venture might have fit far more comfortably perhaps on a home screen level. Lastly, though I believe a great movie might be in here somewhere, sadly, only a mediocre one found its way to the screen.