Dee Rees upcoming release ‘“MUDBOUND”, which has come with much film festival acclaim behind it – came off as a cliched and deathly slow-paced film about racism in post-WWII Mississippi. And while I’m not going to say it doesn’t make some great hard-to-watch storyline points, it also misses a lot.

We’re on a mud-drenched farm, owned by Henry McAllan (Jason Clarke) a racist and small-minded man and wife Laura (Carey Mulligan), whose marriage was basically an arrangement as she was unmarried in her 20’s, which in this time & place, was almost as unforgiveable as being African-American. They come to live there with their two daughters, and his cruelly racist but caricatured ‘Pappy’ (Jonathan Banks), while the youngest brother Jamie (Garrett Hedlund), is off fighting in Germany. Also living on the farm are the black tenant farmers, The Jacksons, the father Hap (Rob Morgan), wife Florence (Mary J. Blige), along with their children, whom also have a son off fighting in the war, Ronsel (Jason Mitchell). And from what we gather, Ronsel is experiencing far more freedom than he ever found in the USA, which I kinda have to call horsepucky on as truth & history be told, they really didn’t.

The plot of the story, such as it is, sees Jamie and Ronsel return from WWII to completely different receptions from the town and begin to form a friendship through their shared trauma. Clearly nothing good is going to come of this due in a huge part to this being 1945 and in the backwoods of ALL backwoods in Mississippi, which is run entirely by the KKK and in due course we get a searingly violent scene set to a beautiful gospel hymn. In fact, it seems to kinda be an unintentional irony of this film that all the really truly horrifically crappy stuff happens either in church or when set to a hymn. There are some moments of absolute terrifying horror that I am sure really did happen to many who defied the KKK ruling back in those times. These parts of the story are the ones that break you and actually make this film come out of it’s slow draw into actual story-telling drama. I think the ending is meant to be uplifting, nonetheless, but I found it all rather patronising and fantastic – made to be as if Germany post-war was an utopia of racial harmony when nothing could be further from the truth. 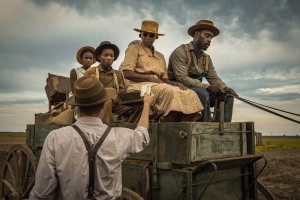 Overall, this is a long drawn-out film, whose paper-thin characters can’t stand up to the weight of history thrust upon them. The stand-outs of those characters though are Hedland & Mitchell, both of whom make this film a better by their performances. Mulligan’s character comes off as superficial, annoyingly whimpering at times, but does redeem herself by showing her character to actually have a heart. I was completely looking forward to Mary J. Blige’s performance, but as such, found it to be glaringly at odds with the time frame of the picture as she wears a pair of designer sunglasses throughout most the film. Probably one of the best parts of the film is the cinematography by Rachel Morrison, as it’s crisp, gritty and very believable. Mostly though, the film comes off as an unvarnished understanding of the unglamorous, subservient pragmatism needed to survive as a black man in ’40s Mississippi, but it just isn’t very compelling or convincing as such.