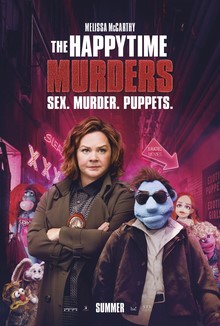 In The Happytime Murders, a private detective named Phil Philips (Bill Barretta) picks up a new case, which leads him directly into a series of brutal puppet homicides. Someone is targeting the cast of The Happytime Gang, a once popular sitcom whose cast has hit hard times, and Phil has to team up with his old partner Det. Connie Edwards (Melissa McCarthy) to solve the case. In addition to McCarthy, whose slapstick performance comes off as rather effortless, you’ll also encounter Maya Rudolph, portraying Bubbles, the noir P.I. secretary to Philips, Elizabeth Banks as ex-human girlfriend Jenny, and (a sadly under-utilized) Joel McHale as smarmy FBI Agent Campbell. 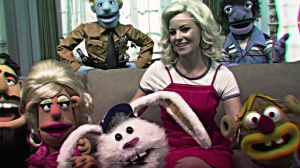 The murder mystery in and of itself, isn’t anything you haven’t seen before – neither is the twist at the end. These cute puppets though are revealed as porn addicts, drug addicts, plastic surgery addicts, sex addicts and worse, in other words, just like us. But that’s really what the joke of the whole film is – as they make due on jokes of puppet racism, puppet stuffing, what happens to puppets in jail, and to be honest, some of it was quite funny. It’s a somewhat weird, crazy and ingenious idea to be honest. It’s like Henson knew he had this one opportunity to tell an adult-oriented puppet story that entertains comedically, has an actual storyline and isn’t a cartoon type film. But when I say it’s for adults, it’s because it truly not a family-friendly movie in the slightest. It’s over-the-top heavy on sexual humor, along with violence, although how ‘violent’ is it really to shoot a puppet and stuffing blows up – or have a dog-attack on a puppet when 5 yr. old’s tear their dolls apart like this everyday. Well, it could be used in the context of point, because subtlety won’t make the point that puppets can be used to tell stories, but also have something meaningful to say in that story. But it’s mostly effective due to Bill Baretta and Melissa McCarthy being talented comedians who know how to make their sillier jokes feel like extensions of their characters and the relatively absurd reality in which they live.

The humor in The Happytime Murders can be raunchy and sophomoric, and its story will no doubt be too simplistic for some, but those who don’t suspend disbelief and go with the flow of imagination here, are missing out on what was intended to be an hour and a half of some good laughs.

I expect The Happytime Murders to be a hit among McCarthy and adult Muppets fans alike, as well as those seeking a don’t-take-it-so-seriously fun comedy in the closing days of summer.