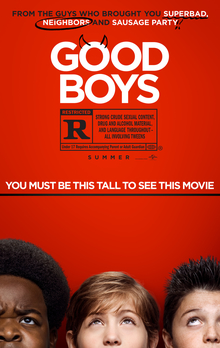 Imagine my surprise at seeing this film was actually getting some positive hype on it as I really didn’t know what I was going into to see..and that’s how I like to do it.
Unfortunately “Good Boys” is not as smartly written as I had hope for. It’s funny to a point, but the film seems to be so smitten by the sixth-grade boys poking around adult themes that it rarely tries to go beyond being raunchy and crass. Sadly, those are the times it’s actually good.

The kids here do a decent job at acting Jacob Tremblay playing the lead Max is pretty much an every man type role who wants the girl and goes to great exaggerated lengths to get her, over & over again you see all the break ups played out rather humourously.  Brady Noon is the drama kid Thor, who wants to be cool, tries to hard, but he can really sing well, so of course ends up as the lead in the school play. And Keith L. Williams as Lucas, is the nice, honest guy almost to a fault.  Again, these are all archetypes we saw in American Pie shrunk down to pint-sized levels. The main problem with that is this films wants to apply the same standards of those comedies to this one.

On paper, it probably seems like a great idea that just didn’t hit it’s well-intended mark. Don’t get me wrong as while you do laugh at parts, it just doesn’t feel witty enough to make you genuinely laugh out loud. Sure, it was cute and amusing, but as a comedy, it left a lot to be desired.