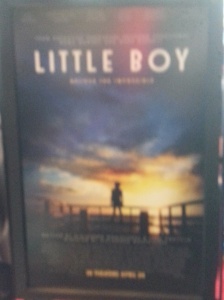 “Little Boy” is one of those ‘feel good’ films in which deals with the story of a 8-year-old boy trying to bring World War II to an end so that he can see his father again. 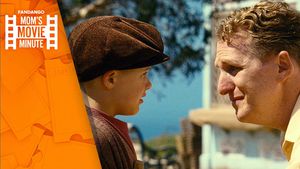 It follows the story of “Pepper Flynt Busbee” (Jakob Salvanti) having a crisis of life that children can have, after his father, “James” (Michael Rapaport), is drafted to war after his brother “London” (David Henrie) is deemed unfit for being flat-footed. While his mother “Emma” (Emily Watson) can only stand by as the local priest “Father Oliver” (Tom Wilkinson) gets the unusually small boy, who is given the nickname “Little Boy” by all the townspeople of O’Hare, which is one of those picturesque little towns that you only see in postcards, to think that he can actually ‘will’ his father back home if he follows a list of good deeds to do. 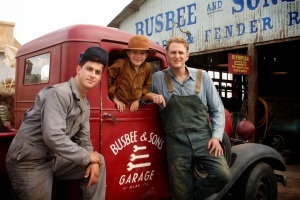 While the film does capture the magic-obsessed boy trying in trying to navigate the fine line between the reality of his life with the delusion of his fantasies because of his love for his father, it’s also very predictable and a bit dangerous in stating that all the boy has to do is wish it, and it will happen. Add in our country’s anti-Japanese resentment during the war, depicted in a bit too cartoonish strokes at times, as once Pepper befriends the only Japanese man in town, “Hashimoto” (Cary-Hiroyuki Tagawa), in part as its one of the things on said list, and of course changing the way he thinks about the prejudices of the times. The little town is full of racists, including his own brother, who so readily buying into the delusion as Little Boy is part of a magic trick that really sends his imagination, and theirs over the top. In one scene, at the precise moment the boy’s attempt to ‘move a mountain’ coincides with an earthquake striking the area with the towns newspaper then reporting the boy has done it.

All in all, I think it might be trying to be a well-meaning film but is quite manipulative on a very misguided scale. In this case, Little Boy is the rare faith-based type film that many viewers may find legitimately offensive because of what it suggests is just too much. By telling kids to just ‘wish’ for something to make it happen by doing a few good deeds, is truly not a good thing. They should’ve stuck to just doing good things for all the right reasons, not the one depicted here. 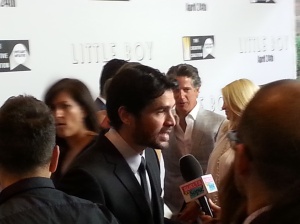 On a side note, I did enjoy meeting the cast and director of the film. All very nice people and of all the oddities of this premiere I sat next to Tara Reid and the Jedward Twins, whom I had no idea who they were until I got home and researched Irish twins. ha! They were sweet and nice as anything, told me I would cry during the film, I didn’t. And Tara for all her bad press, was so nice and fun. Kind of went in tone for the film for me, Don’t always believe everything you see or read.