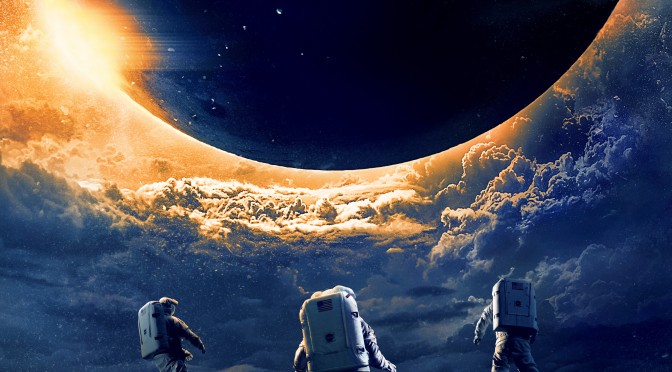 Going into director Roland Emmrich’s latest film “MOONFALL”, I kept an open mind knowing it was going to be a disaster film of some sort, expecting a dumb fun disaster film with some crazy fun set pieces. What I didn’t expect was it to be the complete disaster that it was.

To be noted, I’m not someone who will intentionally trash a film just for the sake of doing so, but this was just plain bad and there is just no way to sugar coat this plain in-your-face fact. If you go into this movie expecting anything other than cheesy acting and a preposterous story the you will be sorely disappointed.

The film’s premise is simple. The moon’s orbit is changing and making it get closer to Earth, raising the question, can Earth survive? Which doesn’t sound to bad as a whole to make a movie about as we’ve seen it before, but hey, who knows, this might be good right?! But instead the film decides is going to try to offer a cerebral and complex backstory to the moon for some reason, along with at the same time mind you, astronauts Brian Harper (Patrick Wilson), and Jocinda Fowl (Halle Berry), facing an alien while on a space mission singing “Africa” by Toto. Oh and let’s not forget the pill-popping conspiracy theorist KC Houseman (John Bradley), who of course has always wanted to be an astronaut trying to get into NASA and magically does exactly that. Then there is the car chase with Harper’s son Sonny (Charlie Plummer), and him getting thrown in jail, all the while, yes again, all at the same time then they have families that are escaping the imminent demise of Earth with tidal waves and all, mind you they are showing actual real disaster footage of tsunamis along with the inevitable CGI. Not even Michael Peña as step dad Tom Lopez, who is usually a spot on actor, can save this from complete mind numbing disaster. But it hasn’t ended, oh no it hasn’t ended, as a ten minute exposition where Harper ‘learns’ that humans actually originated from a halo ring, but then A.I. rose up and took over nanoparticles to kill humans, so the humans made 1000 moons and flew them to different parts of the galaxy. Say what now?

They literally throw the everything but kitchen sink at you including actual footage of the Endeavor space shuttle supposedly being commandeered out of the California Space Museum so it can be flown to the moon to blow up the bad alien that lives in the middle of it. And don’t get me even started on discussing the lacking of any intelligence dialogue along with just flat out bad bad acting by every single person involved in this film, not even Donald Sutherland coming in for a quick two-liner can help here.

Of course you know never to take these films seriously, but as well, you do want to have some fun while watching, but instead of even laughing at the absurdity of it all, you will instead just be miserable for two hours and I honestly feel I should award myself, and anyone else points just for making it all the way through this one. I don’t think I could say not worth it in any other way but to simply state “Not Worth It.