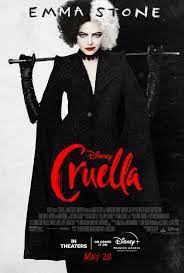 Estella or Cruella… This new offering of the old traditional story from Disney, definitely delves into a completely different outlook on this once cute story of a villainess and her adorable Dalmatian puppies. This prequel from director Craig Gillespie, is quite possibly the “CRUELLA” we didn’t know we needed, until we actually did.

To begin with, this version is a bit darker than any previous interpretation, animated or live action, and it is fun to watch Emma Stone take a deep dive into this character and come out sparkling. The story told here starts with young Estella (Tipper Seifert-Cleveland), and her mother Catherine (Emily Beecham), on their way to start a new life in London in the 1960s. She aspires to be a fashion designer as like her mother, she is quite talented with a needle and thread. Young Estella struggles with her identity with her strictly parted down the middle, half black/half white hair, as Catherine tries to teach her how to lay low, and to fend off teasing and bullies, as she has a bit of a wild side that she doesn’t have the best self control over. Tragedy ensues and with that past defining her, we get to see how she eventually becomes Cruella De Vil.

After said traumatic events, we find Estrella alone on the streets of London, where she is befriended by a pair of young street thieves, Jasper and Horace, and ends up with them. She ensues in working a life of crime and grift with the two, who come to appreciate her street wise sensibilities and they become a family of sorts. Flash forward to the 1970s and Estella (Emma Stone), is plodding away in a store as a cleaner versus her dream job in the world of fashion. When fate accompli happens and places Estella in the path of self-centered fashion magnate, The Baroness von Hellman (Emma Thompson), takes her under her wing and uses her talent for her own benefit. The Baroness treats those around her terribly and with this vile treatment, intimidates Estella. But her friends Jasper (Joel Fry) and Horace (Paul Walter Hauser); see this as an opportunity to rob from the Baroness (per Horace: there is ALWAYS an angle) and as Estrella’s designs start to gain attention, this places them at odds with one another – that is – until Cruella shows up. Cruella soon takes the fashion world by storm with her penchant for the theatrical. Her bold designs and innovative looks, give her the power to upstage the Baroness at every turn, placing her front and center for the camera at major events, but also putting her in the crosshairs of The Baroness’ narcissistic tendencies of revenge.

Emma Thompson delivers one her best performances in recent years. She takes the extremely over-the-top character of the cartoonish Baroness and makes her strangely realistic and relatable. Almost sort of like an exaggeration of a stereotype, but still resembling actual people from the real world (I might actually know a few of these). The other Emma – Stone – gives Estella heart, to where you care about her and want the best for her, even if the Cruella side of her character doesn’t always make the best choices, Stone lets you enjoy both. Fry as Jasper and Walter-Hauser as Horace, have some of the best comedic moments in Cruella, and are truly hilarious together as the famous street wise duo of thieves who like nothing more to “Pick a pocket or two.” John McCrea as Artie is a hoot as the second-hand storekeeper and could’ve been more of a voice within the film, as his fun-loving character seems a bit underutilized. I wish that there was more to his and the other supporting cast’s roles, as it feels like Anita Darling (Kirby Howell-Baptiste), is an afterthought given the ‘darling’ nature of her childhood friendship with Estella, and then having a hand in making Cruella famous. John (Mark Strong), Roger (Kayvan Novak), and Gerald (Jamie Demetriou) play characters of henchmen/housemen variety as well, and all kind of shuffle on screen just to be shuffled right back off. One could question why some of their characters were even put forth, but in the long run, it does serve the story.

The biggest stand out that doesn’t involve the acting ensemble is of course, the stunning costume design giving us true works of art featuring cool retro, edgy storytelling from costume designer Jenny Beavan, as well as the gorgeous makeup and hair lead by Nancy Stacey. Not to be outdone, is the wonderful production design from Fiona Crombie, and perhaps my favourite of all, the soundtrack from music supervisor Susan Jacobs. There doesn’t seem to be many talking about it, but this soundtrack is packed with wonderful song choices from Blondie, The Rolling Stones, Queen and The Clash – to name a few. For me, it was a lovely highlight I wasn’t expecting and couldn’t stop myself from singing along and yes, grooving out!

Perhaps one of the few downfalls is the length of the film. At two hours and fourteen minutes – it did run a bit long, but don’t get up out of your seat just yet, as make sure to stay for the post-credit scene, as it hints at what’s to come.

“CRUELLA” AIRS ON DISNEY+ AND OPENS IN THEATERS NATIONWIDE ON FRIDAY, MAY 28, 2021