A Walk in the Woods is essentially a two-hander piece between Robert Redford’s Bill Bryson, a travelling writer who teams up with his old companion Stephen Katz (Nick Nolte) for a hike along the 2,000 mile-plus Appalachian Trail.
Bryson is a sarcastically funny cynic who has his life in a certain order that has become mundane for him, whereas Katz is a grumpy recovering alcoholic who still tries to re-live and remain in his more youthful days. Their contrasts can appear a tad caricature like, but their acting ability, charm, and on-screen chemistry binds the film together well. 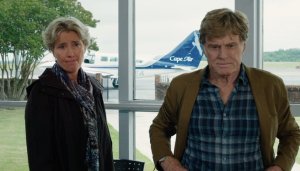 Its a nice witty, little jaunt of a film and while some could be of the opinion that Redford might have wanted to make a bit of an environmental statement here (I disagree), Nolte keeps us entertained all through till the end. Seeing Emma Thompson is always a delight as Redford’s wife Catherine Bryson, but it’s truly Kristen Schaal as Mary Ellen, the annoying, obnoxious fellow traveler whom talks endlessly and knows all, that brings the most to her small, albeit scene stealing role. 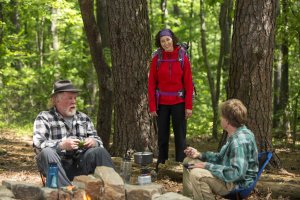 As you might expect, yes there are a few lullsy moments throughout the film but A Walk in the Woods is no Wild nor does it try to be.. it’s more ‘The Odd Couple’ on a roadtrip – buddy type film with Redford as Felix and Nolte as Oscar.
It’s a safe bet that will appeal to a older audience, though they might be a bit surprised with some of the language by these two wonderful actors and while very sweet..I would definitely put it in the category of “sweet & nice” which is a perfectly okay way to spend a few hours!!