“Face it, Gru. Villainy is in your blood!” Dru (Steve Carell)

This fun, third-time around romp back into the world of the minions and crew, tells the story of the ex-villain Gru, who teams up with his twin brother Dru (also played by Carell), whom he has never met, in order to fight against former famous Hollywood child star Balthazar Bratt (Trey Parker). Balthazar, who has become a 80’s obsessed super villain who uses powerful bubble-gum to fight and steal the worlds biggest gemstone.

After being fired from the AVL (Anti-Villian League), Dru tries to convince Gru to come back to being a villian. With the Minions off being busy speaking and singing gibberish – almost becoming reality show singing stars in one of a few hilariously fun skits done with them. Along with being taken jail, we get a fantastic little spoof on JailHouse Rock and whose dance in prison stripes to the Pirates of Penzance’s “I am the Very Model of a Modern Major General” brings down the house. Agnes (Nev Sharrel) and her adorable obsession with unicorns, and Gru being a basically worthless but lovable villain/anti-villain. At the same time, the movie introduces some positive new dynamics in Lucy (Kristen Wiig) as she isn’t as annoying as she was in her first movie and the fun twin camaraderie between Gru and Dru is completely infectious. 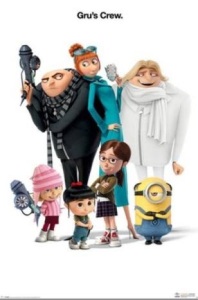 The plot has enough twists and turns to stop it from being formulaic, and the movie has some excellent and funny references to the previous two films. Finally, Bratt is a perfect villain for this type of film and is too tongue-in-cheek to resist. The only little downside of this brotherly union is the minions have less of a role – maybe a little mistake when you consider they are a certifiable home run at any time.