Taking this Pepsi ad/web-series one step further, Director Charles Stone III turns “UNCLE DREW” into a full length 1 hr 43min run-time feature film. As someone who doesn’t really follow basketball, I might have only known who a few of the players were. Though even if you’ve never seen the Pepsi ad, you will catch on immediately that it is a lot of young players were made to look old, enhancing the effects by adding in Shaq as basically the basketball Wolverine. Besides that, this is a very familiar story-line of the forlorn seeking justice in the form of an underdog sports match. And so it goes ——

Dax (Lil Rel Howery), a basketball obsessed Foot Locker salesman whose dream to coach a tournament- winning street ball team. This dream is made all the more sacred due to the fact his longtime rival, Mookie (Nick Kroll) swatted out his game winning 3 pointer in a high school final match up, which he has never lived-down. Then to top it off, Mookie not only steals his prize player Casper (Aaron Gordon), but his team and his materialistic girlfriend Jess (Tiffany Haddish). Dax has spent his life savings on Harlem’s Rucker Classic registration entry fee and is desperate to get another team when he learns from Louis (Mike Epps) and Angelo (J.B. Smoove) about the legendary street player Uncle Drew. Dax finds the now 70-something Uncle Drew (Kyrie Irving), a street-ball legend who famously played in the same tournament 50 years earlier. Uncle Drew agrees to play for Dax if he can recruit his own roster of players. The adventure begins as the duo road trips to convince Drew’s old teammates to join the team. So off we go and meet Preacher (Chris Webber), wheel-chair bound Boots (Nate Robinson), Big Fella (Shaquille O’Neil) and the legally-blind Lights (Reggie Miller). 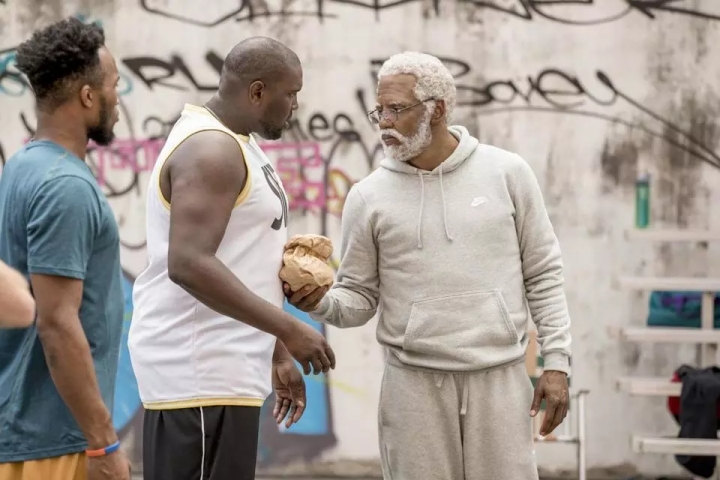 The first third of this movie had quite a few good jabs at laughter and puns with some good comedic timing moments. From there it seemed to turn itself more into trying prove itself as a ‘good family film’. And while it somewhat succeeds at that, although having Kroll play the same role he always plays, and casting Lil Rel as a Kevin Hart type character – makes it fall somewhat short in this aspect as you can’t help but compare the two. Acting isn’t really a strong point here as per usual, basketball players aren’t really the best of actors. But it doesn’t matter as in essence, I don’t think this movie set out to be anything along those lines of best actor, best film etc… I think it set out to be exactly what it is, a little bit funny, cute portrayal that shows family isn’t always just blood relatives, it is what you make it to be by whomever steps up to the plate.