First and foremost – you don’t need to stay for the end credits! And with that important piece of information out of the way…. We all know that Wolverine solo films are always a completely different type of story, sometimes good and sometimes so-so, and in some way or another do link themselves up to the X-Men films. This one is no different and I’m keeping it simple and not spelling out the whole plotline or giving out spoilers, because no one ever should and every X-Men fan should just be able to go watch for themselves.

For seventeen years, we’ve been watching the life and career of Logan/Wolverine (Hugh Jackman) in the movies. And we have all grown a bit older. Nevertheless, it is surprising to see that mutants also grow old. And then what? This film answers a lot of questions about what happens to the mutants when the many struggles have left scars on the body and soul that no longer heal. Like the dementia that has struck Charles Xavier/Professor X (Patrick Stewart). Who ends up caring for them as they really have no family other than each other. These questions are all answered for you in James Mangold’s third part of the Wolverine series as it presents not only its history, but a storyline of the how the X-Men concludes.

To start off with, Logan plays 25 years in the future in the year 2029 and in an America that appears almost post-apocalyptic. Trump’s wall is not built, there are the old border fences. But otherwise the society seems to be one in which, if perhaps unintentionally, could well be the result of the new American policy. The mutants have been persecuted for a long time and only a few remain. Those who do, hide. Logan himself is now a limousine driver on the American-Mexican border. His residence: remote Mexico in an old factory. Here, with only the albino-mutant tracker Caliban (Stephen Merchant) to provide care, he hides Professor X, on whom dementia has taken a toll which leads to problems with his telekinetic brain. If he is not constantly medicated with the drugs that Logan is getting on the black market, his attacks can and do trigger seismic activities that can kill hundreds of people. Logan himself is as he always was: cranky, constantly pissed and always on guard. But he too is aging. His powers have been dimishing now for some time, his body is littered with scars. And with declining healing power, the adamantium he was injected with years before is slowly poisoning him and he relieves the pain with a constant consumption of alcohol. It feels as though these last few mutants are just waiting for the end to happen when there will be none of them left.

But then comes Laura (Dafne Keen). The young girl is a mutant, even if an artificially created one, who escapes the Transigen labroratory she’s been created in with the help of a nurse, Gabriela (Elizabeth Rodriguez). She needs Logan’s help to quickly get to a certain place in North Dakota, which she knows only from the old X-Men comic books. Of course though, there is an army of mercenaries from the lab lead by Pierce (Boyd Holbrook) and Dr. Rice (Richard E. Grant) after them.

Logan is a somewhat unusual hybrid film. What first catches your eye is the violence that this film entails. It surpasses the predecessors in a big way with this. And it’s the one part that truly bothered me as it’s done mostly with kids. Not 13-15 year olds, but kids around the ages of 9-12 years old. I found it somewhat disturbing to say the least watching countless people slaughtered here, by kids. Dozens of times we see claws hitting heads, limbs are cut off, people mutilated. Trust me when I tell you this is no “family-friendly” film here, Logan has been given an R rating and is worthy of it. While the film has kids in it, it’s not a film to take your children to.

Oddly enough with all the violence of the film is somewhat counteracted as Logan goes a very different way. Apart from the usual slaughter, there is hardly any use of mutant forces. It’s much more melancholy than I’ve ever seen an X-Men film be. Logan is a work about the aging, about the pain which determined the last days of these mutants, who have lost everything even though they tried so hard to save it all. It is a film about people who are tired and the world has nothing left to offer and who no longer have the power to revolt against a society they do not want. Logan and Xavier are tragic heroes in the classic Shakespearian sense. Their common friendship, which is almost that of a father-son relationship, is what makes Logan really interesting on a human and emotional level. The two have only each other and Logan nurses him at the end of his days. It is quite unusual to see these once powerful characters as they are here in this film weakened by age and illness. 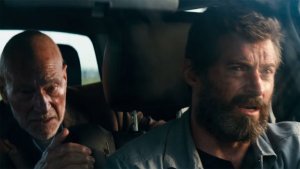 Mangold pulls the perfect ending for the X-Men. Of all the mutants and superheroes, they have always distinguished themselves as those who have fought for their dignity and humanity during their lives. And while the film has a few points at the beginning that didn’t flow well right off, it’s a satisfyingly dignified and yes, surprisingly sad finish.

Thanks all for taking the time to give this a read. Let me know your thoughts if you liked this film or not. Don’t forget to give this page a follow or a follow on twitter as well @pegsatthemovies. Cheers!