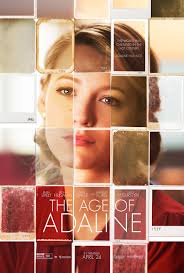 The Age of Adaline plays like preposterous story, booby-trapped for maximal ridiculousness, with little tasteful conviction and is far from the tearjerker suggested by the trailer. While it’s not entirely an unpleasant film, it is more than a bit dull, reining in the inherent silliness of its material and taking few risks — in other words..Sappy, Sappy and then more Sap. Throw in some absolutely terrible dialogue and some mediocre acting and you have yourself “The Age of Adaline.” While the plot might be unrealistic, at least it’s based on something a lot of us might actually wish could happen, whereas the actual dialogue is not even something the bigger stars of this film can save, and it’s hard to watch that kind of talent be forced to actually repeat this script.

As we plod through this story of “Adaline Bowman” (Blake Lively) a woman who has miraculously remained youthful 29 years old while actually being 109 years of age, they never pull us inside Adaline’s head space or make the premise, which could actually be interesting if done well, meaningful. For example, they never really delve into the fact that the character is being a woman at once old and young at the same time..Instead, they stick to a fairly bland romantic storyline, reducing Adaline’s presumably terrifying, enlightening experience to a predictable choice between following her head or her heart. 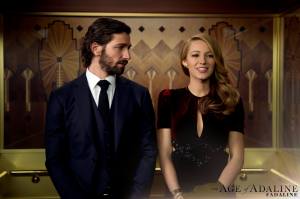 In this little ditty of sappy movie gone bad, Adaline has remained ageless for nearly eight decades due to a freak lightening storm-car accident combination that happened to her. After years of a solitary life of never allowing anyone to get close to her lest they find out her big secret, lo and behold, on a completely ‘chance’ encounter..she meets a man, a charismatic philanthropist named “Ellis Jones” (Michiel Huisman) on a one-night stand and yep, you guessed it, he immediately falls in love with her..literally within 12hrs and wisks her away to his parents house in the country to meet them. Because yeah, that always happens. Without giving to much away, it turns out his father, “William Jones” (Harrison Ford) might already know her. Cathy Baker is “Connie Jones” Ellis’ mother and she can see something is up from moment one, but neither one of these good actors can save the really awful dialogue they are made to spout out. 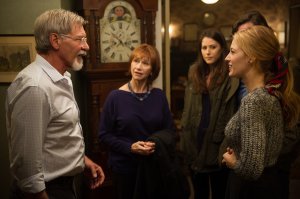 If you haven’t figured out by now or what’s going to happen next while cringing in your seat, well, then this film is perfect for you. And yes, I know there is a niche’ audience for these types of films, and I can roll with that. What I can’t roll with is bad writing and while Blake Lively has done some really good supporting turns in such films as The Town, Sisterhood of the Traveling Pants and Savages, she cannot yet carry an entire film as not even Ellen Burstyn as her ‘daughter’ “Flemming” can save this confected cream puff of a melodrama. This film never lunges into four-hankie territory, nor does it melt into Nicholas Sparks type corny romance. It had potential, sadly they missed it.