Twenty-Five minutes in and I knew Director Gina Prince-Bythewood‘s “THE OLD GUARD” was most likely based on some type of book/comic series that was not known to me. Sticking with the film though was a decent pleasure and doing a touch of research after gave me the insight needed.

Turns out ‘The Old Guard‘ is based on the recent 5-part graphic novel of the same name from Image Comics, and stars Charlize Theron as “Andy”, along with Booker (Matthais Schoenaerts), Joe (Marwan Kenzari) and Nicky (Luca Marinelli) make up the tight knit group of four covert mercenaries who fight to keep peace.  With a seemingly almost immortal mysterious inability to die, a trait that once exposed on surveillance tapes by supposed ex-CIA agent Coply (Chiwetel Ejiofor) who had ‘hired’ them for a job to save a group of school children who had been supposedly kidnapped, gains unwanted attention from eccentric British pharmaceutical executive Steven Merrick (Harry Melling), who plans to experiment on the four for the good of mankind aka ‘profit’. 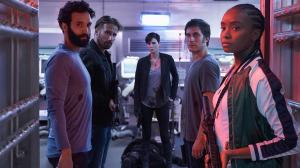 Greg Rucka, creator of the graphic novel series, writes the screenplay, and it’s a bit of a mixed bag. The fleshing out of the team’s backstory brings with it some emotional ties to the past, which work effectively as without knowing any background, you’re able to follow along. All too often though, the dialogue falls into cliched and stale traps – like when they are trying to look all undercover while meeting in a local street bazaar, they end up standing out so completely that you almost have to have a laugh at it. But it feels particularly clunky when the team come to explain their unusual abilities to newcomer Nile (KiKi Lane), a young U.S. marine who discovers she is just like them while on duty in Afghanistan.
⠀
KiKi Lane showcases Nile’s innocence and shock well, as she discovers she may not be quite like other marines in doing what they’ve clearly been doing for hundreds of years. Theron gives a plaintive performance, conveying the weight on Andy’s shoulders and the burdens carried through the years convincingly enough and at least they didn’t try to have her do too many of those floppy comic lines sometimes found in similar type features. Her fellow mercenaries though never really get as much of a chance to make their mark with the exception of what takes place between Booker and Andy. Theron really kicks ass in the well choreographed hand-to-hand combat scenes she does get as does Lane, and there are bouts of bloody action to enjoy, but these are over rather quickly, with the team never really feeling like they are in any kind of danger. In truth, it’s yet another Netflix release that falls into the usual category; not a classic by any stretch, but definitely a passable and watchable two hours.

“THE OLD GUARD” IS AVAILABLE TO WATCH ON NETFLIX