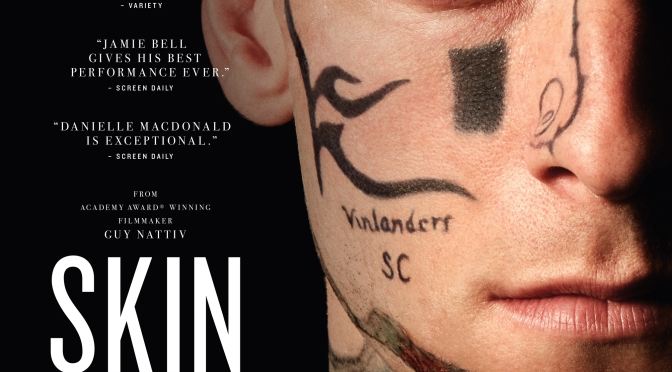 “SKIN” is a gritty true life tale that started off as a short film by Guy Nattiv and turned into this full length feature film featuring some stellar acting and a story, that while it might seem kind of familiar and possibly a bit formulaic, makes into a solid feature.

Bryon Widner (Jamie Bell) is a long-term member of the Vindlanders Social Club, run by Fred Krager aka ‘Hammer‘ (Bill Camp), who inducts down-on-their-luck young kids into his gang by offering them food and shelter, all the while drip-feeding racist bile into their mindset.  As we first meet Bryon, he’s already beginning to question his membership in the organization, even though he is getting ready to participate in one of their horrible missions to burn up a building with his fellow Neo-Nazi’s.   This self-examination of what he is doing in his life, intensifies when he falls for Julie (Danielle Macdonald), a tough young mother with three kids ranging from 5-13, who has cut her ties with the Nazi ideology.  When he starts to see new recruit Gavin (Russell Posner) go through the same process as he did, he starts to look for ways to get out. 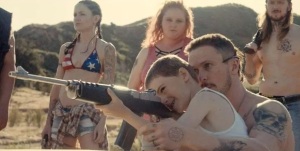 This is where things get tricky.  As Bryon’s journey is inter-cut with intense scenes of his tattoo removal process, which is in and of itself, a hard watch.  We also have to bear witness to him follow through with the mission of hate crimes they commit which then get him put on the Federal most wanted list of criminals. He then himself, has to go underground and work in the same type of situations the people he once so cruelly hurt do.

While the story might fall into traps of it’s own making and be similar to the kinds of movies that deal with this subject matter, i.e., American History X comes mostly to mind, as our main character starts off the movie with strong prejudices and views which throughout the course of the film he starts to question. So why even watch it if we know what’s going to happen I hear you ask? We watch it because we want to see the journey he takes that helps him reach the point of wanting to change, and for me this is where the movie fell down a little, the story felt a little rushed at times. For example I felt that more time could have been spent exploring the family gang-style dynamics because it was that family dynamic that shaped his racial views, but it all felt very glossed over.  I had no idea how large this “gang” was or how much power money influence they had because the movie didn’t tell me.

I thought this film was a credible, true story of what living with the consequences of your actions can be, but also with the hope that there is still time to change. I always have a problem with UK/Aussie actors trying to come in and do strong southern accents as they are extremely difficult and I can usually spot faults with it immediately and here we have not only Bell (British) but Macdonald (Aussie) as leads. That being said, Jamie Bell was phenomenal here and pulled this character off completely, though Vera Farmiga was just criminally underused as Mom.

This film can help change mentalities. I was sucked into seeing the differences of some people whom actually live within this world and make these decisions believing they are doing good in the world.  All in all it’s a good film, I’d say it’s not as powerful as other similar films like the aforementioned ‘American History X’, but then again this a true story and that alone makes it an interesting watch. Not only to see how a real person so entrenched in hate culture can change their lives for the better of not only themselves, but everyone around them as well. 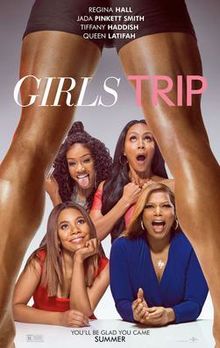 The formula for “Girl’s Trip” is something you’ve all seen before. Best friends from college whom haven’t seen each other in years and have lost touch. All lead separate lives, yet come back together for a big reunion. But just as with all ‘formula’ films – it’s how you do it. And it’s done pretty well right here. While comparison’s to Rough Night will be inevitable as again, the formula is similar, ‘Girl’s Trip’ definitely benefits from a beefed up storyline and complete chemistry between it’s leads.

Speaking of those leads, this fearsome foursome of Ryan Pierce (Regina Hall), the successful married author with the smooth ex-sportsman husband Stewart
(Mike Colter), who is setting herself up to be the second coming of Oprah. Sasha Franklin (Queen Latifah), runs a TMZ style gossip site and like a Real Housewife, her lifestyle exceeds her income. Lisa Cooper (Jada Pinkett Smith), the stressed out, newly divorced of ‘mom’ of the group in everything from her mom-fashion sense to her ‘mom’ flirting style. Lastly we have our stand-out – the steal the film/sure to be our new star of the moment – Tiffany Haddish as Dina, the most over-the-top, wild, fun character to come across the screen in a long time. They are all otherwise known as the Flossy Possy and they have the matching necklaces & 90’s style bedazzled vests to prove it. This raucous romp of a film is bust-out-loud laughing for a good 90 minutes, but therein also lies the problem as the film is 2hrs long. That’s not to say that 2 hours isn’t filled with it’s share of raunchy comedy, heartbreaking reveals, and some truly jaw-dropping gags that run the gamut from all out fun crassyness to possibly even the illegal at some points. But the punchlines are hysterical and you can’t help but laugh uncontrollably.

Haddish’s and her charismatic zip set the tone early, zinging between bouts of physical comedy and wonderfully inappropriate one-liners that are as shocking as they are masterfully and hysterically, delivered. Later in the film, Haddish serves up what will likely become contemporary cinema’s best example of how to use fruit to simulate sex acts (sorry, “American Pie”), a sequence so deliciously raunchy that it’s worth the price of the ticket alone.

But Dina, for all her big talk and hilarious faults, is also an exceedingly loyal friend, and that will come in handy when “Girls Trip” takes on the very big secret at its center. It’s that secret that is the source of much of the film’s drama, and is what makes it for a bit of an overstuffed feature and adds time to the film that makes it just a bit too long as you think it ends at least 3 times before it actually does. As the ladies make their way through all the glory Essence Fest has to offer, including run-ins with a slew of big talents in a seemingly never-ending parade of cameos (Diddy and New Edition makes off with the best ones) and at least one wild adventure fueled by some ill-gotten pure absinthe, “Girls Trip” keeps the momentum going ever onward into the next big comedic set piece. That it all ends with a reveal that while it might dilute its more raucous sensibilities, it ends the film exactly how you think it will. But it only makes it more clear why Director: Malcolm D. Lee and all these ladies should think about coming back again and again for possibly some more hilarious ‘Girl’s Trips’ because I know I will be there for each and every one of them.