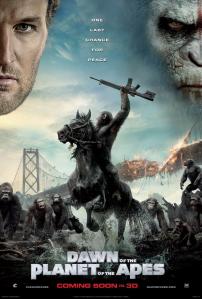 If I’ve learned anything by watching movies, it’s to never have huge expectations for anything, especially Blockbuster season.  While I did like this movie, for the first 15 minutes, I almost felt as though I could be watching a foreign film as it was all subtitles for the language the apes speak…and it was kinda fun.

I’m sure most already know the basic overview of the movie.  It picks up where the last one left off.  Most of the human population has now died off from the man-made ‘Simian Flu’ and the world has moved on to being occupied by a large ape population. Or so we think. This is where the movie got a bit cliched for me.  The apes have the first 15-20 min. of the movie all to themselves as we see how they live now, in the forest they escaped to previously, with “Caesar” (Andy Serkis) being their leader. A conversation ensues between some of the apes about how they haven’t seen human’s in 10 years or so. Lo and behold within SECONDS of that conversation..who shows up???  a human!!! “Carver” (Kirk Acevedo) then does what..oh yeah..he shoots an ape. And so it goes..the beginning of plot where we all know what is going to happen as “Malcolm” (Jason Clarke), “Ellie”(Keri Russell), “Alexander”(Kodi Smit-McPhee) and “Koba” (Toby Kebbell -whom I loved as an actor since RocknRolla but sadly he’s all covered up as an ape) all show up along with Caesar, to stop any violence from further happening.  See the humans are there to try and get the dam that is located in the apes forest, working so they can have power. They strike a deal and just like as with so many deals that have been struck over time, it doesn’t pan out the way it’s supposed to. Surprise! Surprise!

Just as Apes and Humans are not supposed to get along here, there are some ‘human-friendly’ apes and some ‘ape-friendly’ humans, who are both there to ensure that the day will be saved. There is not supposed to be any ‘ape on ape’ violence either. But Koba, an ape who was horribly mis-treated in labs by humans, absolutely hates humans and will do anything to make the other apes believe this. And sadly he does.  But we have “Dreyfus”(Gary Oldman), who is the human version of Koba and believes all apes are trying to kill us.  And the plot goes exactly as you think it will. A wrongly started War ensues when the apes get ahold of guns, but the truth has to come out and does.  There are no surprises in this plot.  One little part I found really funny, the apes are running in the now-defunct old BART system and comes up to some turnstiles, while they are apes and can leap-frog over them etc..one ape actually goes thru the turnstile like a human. I found that incredibly funny! Probably just me! ha! 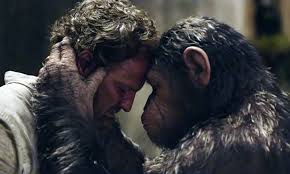 To wrap it up.. the movie is visually quite stunning, when they go to close-ups of the apes, there is no question in your mind that they are real. This is not the Roddy McDowell costume of the 70’s, though I did love those.  🙂  The story-line also gives off a few big, true-to-heart messages. The major one being, there is both good and bad in everything and pretty much every species, and no matter what, you give a species that can operate machinery a gun, and they will use it not only against you, but most likely against their own also.  In case anyone hasn’t figured it out, we are a destructive species.