“I AM GROOT” – ha!  It’s truly the perfect way to start a review of this fun fun movie!! I seriously wanted to just say this and leave it at that.. Because that’s how fun it is and no one wants to ruin this movie with a long boring synopsis and all …riiigghhtt??!!!  Well, okay, I will also mention Chris Pratt.. no..seriously, when did Chris Pratt get this hott??!! 😀   He’s always been the cute, funny guy in the back ground, but here he takes center-stage as “Peter Quill” aka “STARLORD” and he not only looks great at doing it as it’s clear they made him get in some amazing shape for this movie, but it’s like this role was truly meant for his type of comedic chops.

As with all comic book quasi-superhero movies like this one, there has to be a reason at the beginning of why/how everything becomes as it is and this one is no different.  We see a young Peter Quill being brought to his dying mothers bedside where she gives him a last gift before she passes. As he runs screaming, crying out of her room into a big grassy field, he stumbles & falls, a blinding light shines on him and POOF!!! you got it… he is taken away by a spaceship.  26 years later we see Quill as an intergalactic outlaw who attempts to go by the name “Starlord”.  He is part of a clan who call themselves ‘Ravagers’ and while on a paid mission to collect an ‘orb’ he runs into “Korath” (played nicely in a supporting comedic turn by Djimon Hounsou) who works for “Ronan” (another fav. actor of mine playing a bad guy *sigh* ~ Lee Pace :)) an evil Warlord who wants the orb to do what else..control the Galaxy, specifically the planet Xandar, where his arch enemies live & it’s ran by none other than “Nova Prime” (Glenn Close). 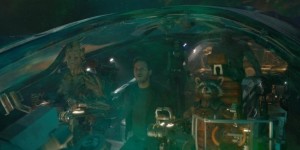 Peter of course gets the orb, but not before he double crosses the very people who took him to this intergalactic wonderland, “Yondu Odonta” (played wonderfully by TWD’s Michael Rooker) who then does what all double-crossed outlaws do and puts a bounty on Peter’s head.  Now the fun starts as everyone starts hunting Peter including, the oh-so-green assassin who is actually working for Ronan, “Gamora” (Zoe Saldana), “Rocket” a genetically engineered hysterically funny, raccoon (voice of Bradley Cooper) & his partner “Groot” his walking & regenerating tree friend (voice of Vin Diesel). who only can say 3 words..annndd you already know what those are..”I am Groot” ~ in other words..hello huge payday for Vin Diesel for yes, uttering 3 words. ha!  Well to cut to the chase, in the land of all things comic books they all get caught..sent to a maximum security prison where they all start to of course, work together along with a new ‘friend’ “Drax” (pro-wrestler Dave Bautista) who really only just wants revenge on Ronan for killing his family.  All this comes together as they make an oh-so-fun escape and get to the town of ‘Knowhere’ so they can sell the orb to “The Collector” (Benicio del Toro).  But when they find out what the orb can really do and why Ronan wants it so badly..and what should really be done with it..well…what will the now-appointed “Guardians of the Galaxy” do??!!  Well, you will have to see the movie for that, because I don’t want to spoil all the fun here…really, YOU HAVE TO SEE THIS MOVIE.. as from moment one it’s truly one of the most humourous, action-packed, visually stunning, and just plain damn FUN Sci-Fi fantasy movies I’ve ever had the pleasure to see so you should too.  Oh and it wouldn’t be right if I  forgot to mention the freaking fantastic soundtrack to this movie!! From the open-sequence on you will be rocking in your seat and just plain laughing.. Who doesn’t want to do that during a movie and be totally entertained??!!  Well, if you are one of the few, then yeah..don’t see it..for everyone else.. go get your groove and laughs on I say!!!