When Ryan Gosling’s character Jared Vennett asks the question to a room full of brokers.. “What’s that smell?” and answers it with “Opportunity” you know then and there to prepare yourself for a very different type of ride.

The film’s narrative is driven by four cynical, fringe Wall Streeter’s disgusted with the large banking institutions’ overriding greed for profits. Separately, but yet oddly together, they make the decision to capitalize on the ensuing housing market catastrophe and the financial meltdown of 2008 upon discovering the market frenzy is being driven by worthless collateral debt obligations.

While I might never figure out how Director Adam McKay made deplorable humans, blinding fear, gut-wrentching outrage and delightful shaming so much fun to watch ~ He most definitely brought along his dark bag of laughs here, but planted them in such a way as to where we actually understood what was happening thanks to fun cameo explanations from the likes of Margot Robbie in a bubble bath, Anthony Bourdain cooking it right up, and even Selena Gomez gambling though her little monologue.

After a rather lengthy dizzying, yet delightful, character introduction, the film picks up pace as the drama begins to unfold. Dr. Michael Burry (Christian Bale), an eccentric financial analyst, with complete autonomy of an investment fund, uncovers variables in his economic forecast indicating a massive housing market collapse. He informs his higher up, Lawrence Fields (Tracy Letts), of his discovery and creates a financial prospectus. In essence, he creates a commodity of selling short on bundled mortgages.

The bankers laugh themselves silly as they willingly sell Burry all the “insurance” he wants. Word quickly spreads of Burry’s perceived madness in a after-work cocktail scene. With interest piqued upon overhearing the Wall Street gossip of the day, Jared Vennett (Ryan Gosling), scoops up the aspects of Burry’s move. Soon, he sells it to a group led by Steve Carell’s real-life character, Mark Baum and convinces them to buy in.

As the debacle is in full free-fall, Baum struggles with disbelief as he and his group have bet against their own umbrella entity, Morgan Stanley. The final team that has uncovered the impending financial crisis, made up of two Wall Street rookie wanna-be’s, Jamie Shipley (Finn Wittrock) and Charlie Geller (John Magaro) who along with veteran trader turned-conspiracist Ben Rickert (Brad Pitt), also struggle with the imploding financial system caused by corporate greed and indifference 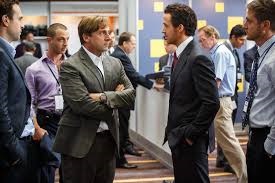 With a mammoth cast, the acting in this movie is pristine with the whole ensemble cast being in top form. With that said however there were three stand out performances that somewhat break this mold.
Ryan Gosling might be the funniest as he narrates and embodies the fact that he’s a scum bag and just rolls with it, offering an entertainingly slick performance. Christian Bale let us feel his pain and lonely genius, stole the show in every scene he was in. The only genuinely relate able character in the lot, Bale conveys a great deal of sensitivity, making it one of his best performances to date. Steve Carell dug deep and came up with a persona that brings Baum to life, even if he does over act at times which I guess is how he really is in true-life form.

With all the ‘truth’ films out there this year, “The Big Short” is one of the more important ones of this group and also one of the best. I wanted to laugh and cry at the same time as the film warns us in a way, who knows what will be the next basic human necessity to be denied by those few who hold power.