Writer/Director David Ayer’s “Suicide Squad” starts off strong. With a booming, kick-ass soundtrack taking us through the introductions of characters and giving us a bit of the backstory on each so we know at least who they are. Unless you’re a major DC Comics fan, you probably don’t recognize every single character of the Squad. The new action movie teams up a bunch of bad guys as a last resort to take down an even more evil force. For those of us that don’t read the comic books, I found this not only helpful, but gave us some fun sides of the characters to boot. 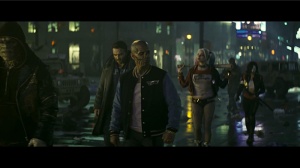 We’ve got Deadshot (Will Smith) the assassin who never misses, Harley Quinn (Margot Robbie) the aslyum doctor who fell in love with her patient who then gave her shock treatment to make her crazy, Boomerang (Jai Courtney) the Aussie who’s boomerangs are like drones and really doesn’t give a rats ass about anyone but himself, Diablo (Jay Hernandez) in essence a firestarter, Killer Croc (Adewale Akinnuoye-Agbaje) is self-explanatory and lives in the underground sewers, Slipnot (Adam Beach) an escape artist of the highest caliber and whilst not really a ‘Squad’ member, we have Katana (Karen Fukuhara) and Archaeologist/Enchantress (Cara Delevingne) and of course our Joker (Jared Leto). You’ve also got the ‘soldier’ side to it all with Rick Flagg (Joel Kinnaman), Lt. GQ Edwards (Scott Eastwood) and our head honcho who proposes and is responsible for putting the ‘Squad’ together, Amanda Walker (Viola Davis). And yes, along with our bit part from The Batman himself, Ben Affleck, we understand why they are, who they are and where they are.

Sadly, no one here can save the convuluted mess of a storyline and bad dialague. The characters are so off-balance and poorly acted, most especially I’m looking at you Will Smith & Cara Delevingne. Robbie’s character would have fit much better in a re-make of the 1970’s classic The Warriors (one of my fav. movies btw) and she probably could have made something with it. Here she limps along trying to be funny but falls completely flat. Only the Joker and Boomerang really pull out the stops and make it work for their characters and you know it’s really bad when even Viola Davis strains to pull off her dialogue as even somewhat believable.

The first 1/3 of this film is definitely worth the watch. Anything after that I can’t guarantee, except of course the ending because it leads us into Suicide Squad Part Deux. I would try to describe the plot, but don’t want to give away how just plain ridiculous it is and really, everyone should just see and judge for themselves anyways as it’s all just CGI.

And just in case you’re really itching to get out of the theatre, you only have to wait until the first set of basic credits is done to get your ending Bat-fix in..not the whole long credit roll. Somewhere in this series is a good movie, so stay, and let’s just hope Part Deux has more to it than this one did.