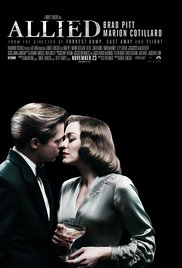 With Brad Pitt’s big return to the screen since his personal life news overtook his career for a bit there, we have him here in “ALLIED” as Max Vatan, a 1940’s wartime intelligence office who finds himself in a predicament with his fellow French Resistance (or is she?) spy and soon-to-be wife, Marianne Beauséjour (Marion Cotillard). A predicament I might add that can be figured out in the first 15 minutes of the film as Marianne makes a quote that let’s you know really where the film will end up going if you’re paying attention. And it’s exactly where it goes.

With uneven pacing and script, the film benefits from beautiful cinematography. The weakness in the lack of ability to successfully leave a lasting emotional impact on the audience, is in the writing and executive producership of it all. As we see Max and Marianne do a 30-sec assasination-shoot em’ up scene reminiscent of ‘Mr. & Mrs. Smith’, and they fall in ‘love’ in about half that time, makes it all a bit unbelievable and undercuts the storyline.

For films that are not as much about the spectacle as they are the drama between characters and the challenge faced therein, it is important for personal/interpersonal relationships go beyond the screen to directly impact the audience. All the makings were here for a deeply moving cinematic story, but it just doesn’t quite make that transition from the mostly superficial and distant. The ending, which tried to be sentimental is done completely in an overly-compensated, dramatic fashion that comes off very falsly.

Supporting work comes via Jared Harris, Lizzy Caplan, August Diehl, Marion Bailey, Simon McBurney, and Matthew Goode. With no stand-out performances, and my screening being on a 50/50 basis of who liked it and who didn’t, I think it will do a couple of good weeks and the box office, but the competition along with a slate of excellent films coming out, might drag this one down after that.