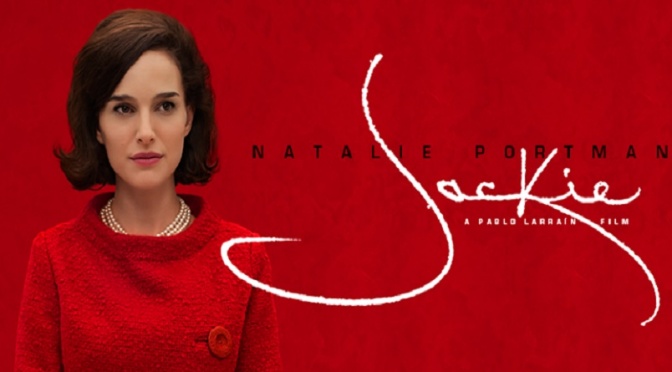 Jacqueline Bouvier. Jackie Kennedy. Jacqueline Kennedy Onassis. Jackie O. Jackie. There are many ways to refer to this iconic woman – and many ways to remember her. That breathy voice. That educated and sophisticated demeanor. Her sense of style… including that pink suit stained with the blood of her husband. Holding her own as she watched the Vice President Lyndon B. Johnon (John Carroll Lynch) be sworn in merely hours after the President’s assasination.

“JACKIE” is about all of this. Though the film fills the span of only short perod in time – the day of and the few days following then President John F. Kennedy’s (Caspar Phillipson) assasination in Dallas, TX on November 22, 1963. The story is told in the narrative of Jacqueline Kennedy herself (Natalie Portman) to “Life” Magazine writer Theodore H. White (Billy Crudup), who arrives at the Kennedy Compound in Hyannis Port, Massachusetts to interview her just one week after the assassination. Mrs. Kennedy is concerned that her husband may be forgotten – or misunderstood by history. White is deferential, firm but professional. He finds a woman who is clearly still grieving her horrible loss, but who is also very much in control of herself – and very much in control of what she wants regarding her husband’s legacy – even to the point of making sure she edits White’s notes during the interview.

While returning periodically to the scenes of the interview, most of Jackie’s story is told in flashback scenes of her as First Lady – especially on that fateful day in November of 1963 – and the four days that followed. With a lot of the story being told in this fashion, the film is trying to paint us a picture of who Jackie really was while First Lady. We get the famous televised tour of the White House that she did, the first ever of it’s kind. And while some parts of this come off as sometimes portraying her as a caricature at times, it’s also giving us a glimpse into something never seen before by the American public at the time.
We get insight into her strengths and weakness in the days following. How she interacts and stands up for what she wants for the funeral to Special Assistant Jack Valenti (Max Casella) but yet, sleeping pills, chain smoking and alcohol are also playing a big role in her coping mechanisms. 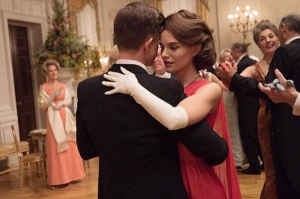 “Jackie” is fascinating and compelling. The script and direction shed a lot of light on what happened (and might have happened) during the private moments of this very public national nightmare, while painting a very personal portrait of Jackie Kennedy. At times the editing and the chronology of events, while not very difficult to follow, simply jump around too much. Portman is really good here and it was great to see Crudup back in a strong supporting, even if he looks completely different and Greta Gerwig as Jackie’s long time assistant, Nancy Tuckerman and Peter Sarsgaard does well as Robert Kennedy even though he looks really nothing like the real RFK, which also was quite noticable with other actors also.
The films score also ‘scored’ with me as it seemly was a life of Camelot to all of those looking in from the outside.

All in all, this film moved me. I rarely get emotional or cry during a film, yet the tragedy of it all got to me more than once. This film might have it’s misses, but all in all, it’s very special and should be seen.

Don’t let it be forgot
That once there was a spot,
For one brief, shining moment
That was known as Camelot.