Let me just start off by saying I went into this with perspective of it being a war movie. And it partially is, but it’s also so much more than just that. It’s more about post-service life for the brave men and women who make the decision to defend our country, as well as the impact it has on their spouses, children, friends, etc. It shines a harsh light on the inefficiency of the VA and how difficult it can be for veterans to receive the help – especially mental and psychological – that they desperately need.

The film, based on a true story, opens with an operation on an Iraqi street that goes horribly wrong. The exact details of the incident are rather hazy but are central to the events that will follow. A trio of soldiers, Adam Schumann (Miles Teller), Will Waller (Joe Cole), and Tausolo ‘Solo’ Aeiti (Beulah Koale), are returning home after their stressful and dangerous tours of duty. Adam returns to his wife Saskia (Haley Bennett) and their two young kids, though money worries and other domestic issues are at the forefront of their relationship and his mind. Solo returns to his wife Alea (Keisha Castle-Hughes), who wants her husband to settle down and father a child with her but he has it in his mind to return to the battlefield and be with his ‘brothers’ as according to him “The Army saved his life” and it seems that’s all he knows. And finally we have Will (Joe Cole), who returns to an empty house, his fiancé having moved out and emptied his bank accounts without a word. Though each man is a trained soldier capable of putting on a brave face, the trauma from their time on the battlefield and their attempts to get help are met by a bureaucracy that is beyond overloaded with no true help in sight.

The performances were all on par all the way around and with them the storyline was not only gut-wrenching, but kept me riveted for the entire movie. This might not be an Oscar type film, but it is going to get very high marks from me because of the subject matter and the story told. This movie is a different genre movie, not necessarily action, but not completely drama either, rather it is a movie of true passion of containing real life drama, real heart and mind, real flesh and blood taking you through it’s paces slow but steady. 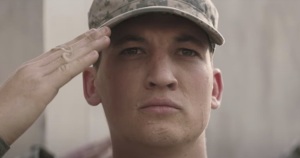 I’m guessing that this movie won’t be a huge moneymaker, as I honestly I don’t see it finding a particularly large audience because fact – we’re much happier remaining ignorant to the horrors of war and the empty shells of humans that it results in. Needless to say, this film schooled me and was a true eye-opener as I left the theater with such a huge range of emotion, mostly rooted in anger and sadness and a sense of hopelessness. While I would love to think that the light it shines on its topic would result in some change, if not at least greater awareness, I doubt it will. We as Americans, have let our soldiers down. And this hasn’t just happened..its gone on for decades and something needs to be fixed in a big way. Again, sadly, not enough people will probably see this film to make a difference..but we all should. Bottom line though, it’s a great film and now it’s your turn to see it.

Media Review Screening: Monday, October 23,2017 ~ Courtesy of Universal Pictures
“THANK YOU FOR YOUR SERVICE” will be in theaters nationwide on Friday, October 27, 2017

2 thoughts on “REVIEW: “THANK YOU FOR YOUR SERVICE” (2017) Universal Pictures”