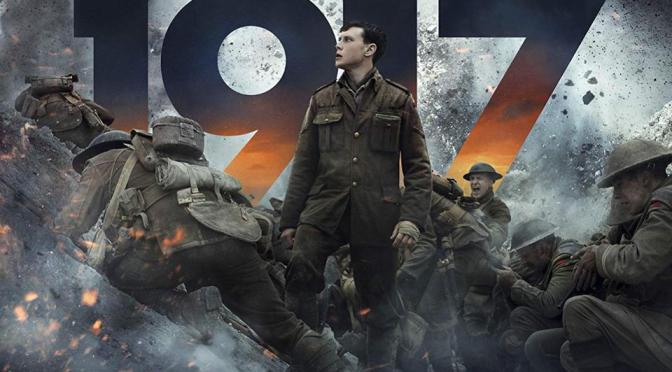 “1917” is a cinematic feast for the eyes, with long expansive shots that follow the lead characters as they execute their mission. It does not hide the horrors that existed in trench warfare, it shows them for their brutality and abundance. A war that is now a century old and therefore no longer widely talked about or understood, is vividly captured in this stunning dramatization by Director Sam Mendes. To anyone who might be hesitating to see the film because they think they will be subjected to the graphic violence and gore of say a ‘Saving Private Ryan’, I can only suggest you don’t, as while ‘1917’ is realistically gruesome, Mendes captures the horrors of war with a more emotional sense and aesthetics. While graphic at varying moments, you are never hit over the head with it. ‘1917’ in this way is beautifully artistic, never straying close to being shock art, but not holding back at the same time. 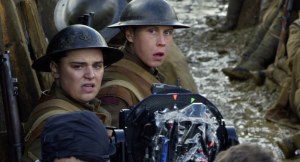 The year is of course ‘1917’. Deep in the heart of France, British soldiers battle the Germans in what appears to be insurmountable odds. Filmed and edited as if it was one long take by 14 time Academy Award nominee cinematographer Roger Deakins, the camera never leaves our leads motion on the battlefield where we meet the two young soldiers, Lance Corporal Blake (Dean-Charles Chapman) and Lance Corporal Schofield (George Mackay). They’ve just been assigned an impossible mission by General Erinmore (Colin Firth) to do three very important things: 1. travel by foot behind enemy lines 2. avoid German snipers and artillery 3. find a British battalion that is about to walk into a trap set up by the Germans. It’s a task so dangerous it will probably cost both men their lives, but if they fail, it will lead to the massacre of 1,600 British soldiers. Adding to the urgency of the assignment, Blake’s older brother is one of the 1,600 soldiers about to walk into the ambush. There is no clock ticking in the corner of the screen, but we know time is of the essence, and quite limited.

And although MacKay and Chapman do a pretty phenomenal job at capturing the true essence of their characters going through a literal hell, it’s the side characters with little-to-no screen time who steal their spotlight. Andrew Scott, Mark Strong, Richard Madden and Benedict Cumberbatch are checkpoints along the way, but they do impress with the few lines they’re given.

Apart from a couple of nit-picky things there is nothing bad about this movie. To be fair, it could be said some of the scenes are empty and it might test audiences’ patience. It’s even eluded to at the start there is no food around, yet Blake looks very well fed. Chapman also doesn’t nail some of the important scenes, which takes some of the emotional punch away from them. The French women in the cave has a baby that’s not hers, and he just happens to have milk – in the middle of a battle field – felt a bit contrived. The only other thing to mention might be the fact the Germans here can’t seem to aim to save their lives, so much so that it did start to feel a little hard to believe at times. 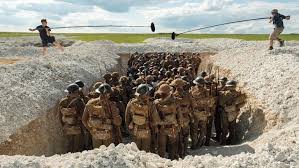 I rated this quite high film for many reasons. Directing, acting, set design, cinematography, musical score, the raw emotion it invokes. Watch if you will, but know there is no pleasure in watching and the film will grab you and the beginning and not let you go. Even though we know the outcome of WWI, there is no joy, there is no peace. Watch because it will allow you a glimpse at the horror and brutality of war; reflect on their service and sacrifice and hope it never happens again.