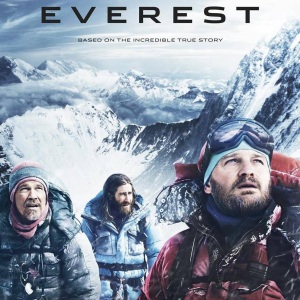 Courage – Fear – Pain – Strength – all the words used in the trailer to describe this film based on a true story. Though after watching this movie I can’t help but think they might have skipped a word – Insanity – because truly one must have a bit of this to even attempt to climb this mountain. To know going in that there is a 60/40 percent chance you might not come down..would and does deter most.

In ‘Everest’ we get brought back to 1996 when the big mountain had been actually been conquered enough times that it was no longer the specter it once had been. That didn’t stop people from wanting to climb it, instead it ended up turning it into a business. Leader of the trend is the New Zealand business team “Adventure Consultants” with partners Rob Hall (Jason Clarke) & Helen Wilton (Emily Watson). The teams that head to the summit are a mix of seasoned pros and moneyed amateurs, forking over fortunes to earn both killer views they get momentarily and probably most importantly thing of course, the bragging rights. On one team you have the clients – ‘average’ guy, mailman Doug Hansen (John Hawkes), the big Texan, Beck Weathers (Josh Brolin), journalist Jon Krakauer (Michael Kelly) and the one small Asian woman, a 47 yr old climber of 6 of the tallest peaks in the world, Yasuko Namba (Naoki Mori) along with guides Hall, Andy “Harold” Harris (Martin Henderson) & Michael Groom (Thomas M. Wright) – on the other team “Mountain Madness” you have the college frat guy guide Scott Fisher (Jake Gyllenhaal) & Anatoli Boukreev (Ingvar Eggert Sigurðsson) who refuses to use oxygen even though they will be at a level noted by Hall as ‘Humans aren’t meant to function at the cruising altitude of a 747’

Having reached the summit and literally touched the peak — their moment of triumph – though problematic as issues with roping and lateness of the afternoon make the timetable of descent turn into a dire situation. A storm sweeps in before certain climbers have turned back. What follows is a brutal waiting game. Among those stranded in the inhospitable climate is Hansen, Harris & Hall – who finds himself curled up in a nook, patiently, almost inhumanly biding his time as numerous attempts to save him come and pass him by due to more storms.

Having years ago read Jon Krakauer’s book “Into Thin Air” I hadn’t realized this was going to be that story told so vividly so I recommend you go in with little knowledge of the body count as Everest plays a bit in the vein of Apollo 13, as you know the story history wise – but in this one there’s only a slim chance the ones in trouble will make it.

The film truly focuses on the brutality of this type of climbing and what we now know was the beginnings of what the business end of this all is. All these climbs-for-hire have literally created a trash bin of Everest as what goes up, doesn’t always come down. And of course the body count of those left up on the mountain has also increased exponentially since this first tragic event. And let’s not ever forget all the sherpas with whom without them, most of these climbs could never be done.

So what’s good about this movie? The 3-D is very good. Throughout most of the film you can’t discern between what is the real on-location shots and what is sound-staged. Brolin & Clarke really have the lead acting roles here and both do well. Sam Worthington also comes on well more towards the end as Guy Cotter. Overall it will prove to be a rough watch with it’s ending for some, but it’s a good film nonetheless.