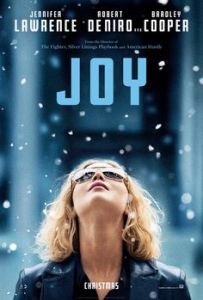 With narration told by her grandmother Mimi (Diane Ladd), the only person who believes in and encourages young Joy’s as her story begins at Rudy’s Bus and Truck metal shop, where being an imaginative creative girl, she entertains herself through paper models of forests and castles.

Based on a true story, the film depicts the rise of female inventor and entrepreneur Joy (Jennifer Lawrence), who rises to fame by hawking her Miracle Mop on QVC. The story is much more than about business success, for Joy is a 1970’s housewife who supports four generations in her house, including her ex-husband, Tony (Edgar Ramirez) and father Rudy (Robert De Niro).

Director David O. Russell struggles here, a bit unsuccessfully I might add, to portray a harrowing the path to the mop. Joy deals with a houseful of kids, only a few of them children by actual age. The motley crew she calls family all crammed in her small house are not on Joy’s side. She is the breadwinner, the adult, the rock whose imagination is a liability to those overly dependent on her. Her mother Terry (Virginia Madsen) a soap-opera viewing addict, who watches made-for-this-film, unfunny soap opera segments that seem unmotivated with there being no implication as to why we are pointing to the off-TV characters. It’s goes on to become a paint-by-numbers affair from there – familial jealousy from sister Peggy (Elisabeth Rohm), dirty financial dealings, the nightmare of the age-old saying, “Do not do business with your family.” 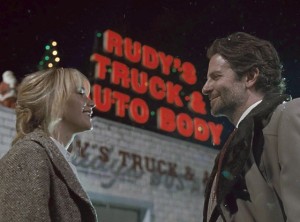 After all, Joy manages to build a mop prototype. She brings it to QVC where the initial sale segment bombs. With Neil Walker (Bradley Cooper), the slick head honcho of newly formed shopping network QVC behind her, he takes a chance and allows Joy to showcase the mop herself. Bingo! The mop sells out. Success? Nope. The parts supplier is screwing Joy, every sale of the mop loses money, and the family wants their money back. Financial ruin follows. Then Grandma passes. But Joy decides she’s been walked all over enough and ‘womans up’ to settle all scores financial and emotional. You would think Hooray! right? If only the story wasn’t so average and been done so many times before would it be all that and more.

The acting is nothing notable as De Niro is no stranger to playing a conflicted father with a big heart, though there is something a bit off-kilter here even for him on this. We all know Lawrence & Cooper play well off each other and they do that again here. It’s Edgar Ramirez, who after falling so flat in Point Break, really stands up and dazzles amongst this all-star cast.

So let me just do a quick sum up for you in one sentence. ‘Down and out mother thinks up an invention, brings it to market, and becomes rich after some pitfalls that, in reality, is all fought and done with lawyers in the end’. In lieu of dramatizing a woman overcoming, Russell instead created a often unfunny comedy.

While the real life, inventive Joy deserves kudos, the bottom line is this is a feature film about the creator of a better mop and offers little on the path to an unsatisfying end where Joy makes it big and helps others succeed.
With all the heavy-hitters in film coming out these last 2 weeks of the year, it’s doubtful JOY will stand out amongst them.