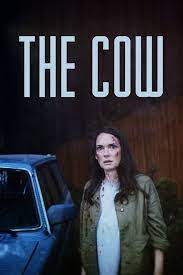 Winona Ryder is truly at some of her best here in Eli Horowitz’s “THE COW“. Along with Dermot Mulroney in this rather fun “genetic” little mystery thriller, that twists along to an ending you’d never quite think of. While it’s not without it’s problems, it is still just simple fun.

With a film title has nothing to do with the animal it’s named after, the story follows Kath (Winona Ryder), and her boyfriend Max (John Gallagher Jr.), as they arrive at a remote cabin in the redwoods and mysteriously discover it already occupied by a younger couple, one Greta (Brianne Tju) and one Al (Owen Teague). The question of why is answered quickly as it’s clear the rental has already been double-booked, so neither couple has anywhere else to go, with Kath and Max being quickly invited to stay ‘just one night’.

And the mystery only deepens when she wakes up to find out Max just up and disappeared with Greta, and a broken up Al is the one to tell her the next day. Kath goes home, but randomly becomes obsessed with getting to the bottom of their sudden breakup – but will learning the truth be worse than she could ever imagine? Yes, yes it can. See what we end up finding out is the ever so important backstory. Kath is older than Max, by 10 to 15 years, as well, Kath is insecure about herself, and being in a relationship with a younger man has made her even more doubtful of her attractiveness, as we see her examining the wrinkles on her face.  On the other hand, Max isn’t very mature for his age, doesn’t even do the most basic of things like drive, and seems to be out of place at a dinner party with Kath’s friends. Turns out, the trip to the woods was an attempt by Max to keep Kath showing her he CAN be the guy for her, and for Kath to keep Max, showing him that she can be adventurous. Which speaks volumes about what is to happen later as she ends up meeting Nicholas (Dermot Mulroney), the man who actually owns the cabin, on her attempt to find out who Greta really is. While similar in age, and while he might be somewhat of a recluse, Nicholas clearly also has his life together, although as we soon find out, not in exactly the way we thought he did.

While the film continues on with twists and turns, not all of them come off as one is not sure if this film is every going to go horror on them, or continue on the path it seems to be heading of everything relying on that one fateful night. Honestly, all the credit here goes to Ryder for pulling the bizarre middle and ending twist off, as without her, Tju and Teague, making those twists from left field that keep you engaged in this mystery ride along with Kath wouldn’t be anywhere near as enjoyable. That they can keep you on your toes guessing, even questioning her end-result intentions till the very last moment, is the point of all of it. Without them, this would not be the clever thriller that it is – even with it’s faults on display – they help pull it off.

Having just been picked up by Vertical Entertainment, the film is set to release later this year. Don’t miss it.