Tennis is usually known as a rich people’s sport and can wholly be verified by just looking at the cost of tickets to even a smaller tournament. For the devout fans such as myself, this has left us for the most part, unable to attend such events. And yes, it is also a very European/white American based crowd as well, especially in the 90’s when the Williams sisters we coming on to the scene. Sure you had Arthur Ashe, but he was in the 70’s and was also a man, and even he had loads of issues being sported on him. With all that leading into the fact that sports movies in general can be difficult watches at times, mostly as the stories either have to be a touching one, a hard one, a biography etc., to make a point. Here director Reinaldo Marcus Green takes us on a journey film of the crazy, intense, wild and somewhat shady life of Richard Williams aka “KING RICHARD“. The film is at times emotional, but most of all, it’s a pretty good vehicle for Will Smith to show off his acting range.

Williams, the father of the now legendary Serena and Venus Williams, comes forth with the focus being mostly on Venus as yes, she is the older sister even though Serena is the more victorious of the two, but the narrative depicts his vision and determination to ensure that his daughters grasp every opportunity – willingly or less so – on their journey to undoubted tennis greatness. Though he does come across as a tightly focused man, he can also comes across and a rather unpleasant, thoughtless individual for whom, after a while, you can began to feel a growing dislike as it’s well known he hasn’t always been the most liked person on the tour, but the question put forth is really whether he was right in having his ‘plan’ and doing whatever he thought was right to get it done. The somewhat arbitrary way in which he treats not just his family, but those around trying to help (and, admittedly, to capitalize on the impending gravy train), can be looked at as all just bit too improbable, but you can’t deny what he did either. Certainly you can put yourself in Rick Macci (Jon Bernthal), or Paul Cohen (Tony Goldwyn), shoes and would have made the decision to tell him where to get off long before it became apparent that these two girls actually did have the ability to make it big. But then as well, it proved Richard to be pretty much right about his ideals after all.

By far the most inspirational part of the movie was really the improbable story. That a dedicated father instilled in his daughters a strength and resilience and confidence that they could do anything, become number one in the world, and in Serena’s case, become the greatest player who ever lived. Training day and night, rain or shine, he kept pushing them towards greatness, when many people scoffed at his claims about his girls, when many refused to train them, when they saw something insignificant, he saw their full potential.

Aunjanue Ellis is really strong in all the film as Oracene ‘Brandy’ Williams, being somewhat of the balance to Richard’s craziness, while Saniyya Sidney does a fantastic job as Venus, one of the best supporting teen roles I’ve seen in a while. She is a revelation and is definitely a name to watch as she completely stole the show at times. As well though they and the rest of the sisters are all too often subsumed in the domineering shadow of Smith. And noting that at 2¼ hours, it is also far too long with too many scenes that detract from the pace, that often can be meandering off and dragged in a lot of areas including how it skims over King Richards past – while many in the tennis world do know there was a true bit of shady-ness to the real man. I think many will have wished we could have done with far more input from the real “stars” of the movie to illustrate just how determined and accomplished they were as opposed to their father.

Overall this is a good watch. So tense, surprisingly funny and with a powerful and uplifting story. A film worthy of the Williams’ epic legacy. Personally I wish it would have shown the journey of the Williams sisters even more into their later career stage, but again this movie is NOT really about them, its about Richard ‘King’ Williams and his belief in them, their dedication to training, and ultimately their resiliency in the face of adversity to become the essentially perfect trifecta that propelled them to unprecedented success that was never realized by any other player before them. When they went onto the court, they truly believed that no one could beat them. Then they went out and proved it. Not only were they out there proving to themselves, but also to every person who went to see them. They then became role models for every other African American girl (and boy) who wanted to follow in their footsteps.

“KING RICHARD” – IS OUT IN THEATERS AND ON HBO MAX NOW

And onto week #5 of quarantine TV watches rated by me. 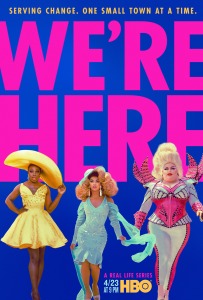 We’re Here: HBO
Found this gem almost by accident and immediately fell head over heels for it. It’s real life about 3 drag queens who traverse small town America where they have residents from each town participate in a one night only drag show. It’s the storytelling behind each person and town that had me in tears at the end of both episodes that have aired. It’s a much needed watch for the close minded among us.
Grade: A

Tommy: CBS Network
TV diversity is so much bigger than film. But every once is a while comes a show that just doesn’t work as well & the characters feel forced..even with a stellar cast including #EdieFalco & #RussellGJones the storylines just fall flat.
Grade: C 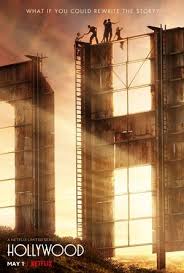 Hollywood: NETFLIX
#RyanMurphy has a signature look to his shows and this one is no different. Set in late 1940’s its beautifully shot but it took me till eps 3 to figure out the difference #DavidCorenswet & #JakePicking – the middle eps. are great, but the finale is predictable & bland. Kudos #PattiLuPone #HollandTaylor & #DylanMcDermott for keeping it interesting.
Grade: C+ bordering B-

Atlanta’s Missing & Murdered: The Lost Children: HBO
A startlingly look at what happened to these children & the conviction of #WayneWilliams definitely deserves a watch as Atlanta’s new mayor #KeishaLanceBottoms takes the bold and might I add, right step in re-opening this investigation. It’s eye-opening & heart wrenching-and worth every minute of your time.
Grade: A

That’s a wrap on Peggy at the Movies TV recommendations week 5. Till next week..stay safe and sane.