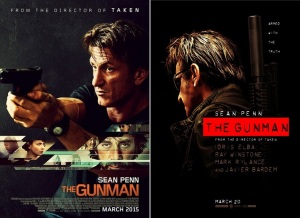 So does Sean Penn want to be Liam Neeson… or does Liam Neeson wish he was Sean Penn.. either way, this film is the sadly the first one. “The Gunman” is from the same Director as ‘Taken’ & ‘From Paris With Love’(Pierre Morel) could easily have almost been called “Taken in Barcelona via the Congo” or “From Barcelona With Love.” Clearly the guy has a certain directing style. Too bad it didn’t work here with this stellar cast that puts Sean Penn as “Martin Terrier” a sniper on a mercenary assassination team in the Congo pretending to work for an NGO, who is forced to go into hiding after a successful kill shot puts him on a hit list.

Though Sean Penn does a really capable job of doing the action hero thingy here as his physicality is dammed impressive and he’s definitely believable in the part. It also helps that he’s in absolutely amazing shape for a man his age and definitely seems like he has skills built up over his career which works for him here. His story is somewhat convoluted though..told in that tortured soul way that sometimes just doesn’t make sense even though he’s somewhat straight to the point kinda guy, which I liked. There is also a decent enough subplot going on a medical condition Terrier has which plays off in a pretty cool way throughout the film, most especially at the end but all in all, this is not a particularly good film or even an entertaining one.

While I am a huge fan of some of the co-stars here..though none of them with the exception of Jasmine Trinca as the love interest “Annie” of first Terrier, then with Javier Bardem’s character of “Felix”, have much to do. Felix, whom I guess we could say is a ‘co-worker’ of Terrier, is really wasted in this role as he plays it in such a manner you just want to cringe and not in a good way. The one final scene between the characters is almost flat out silly.

Both Mark Rylance “Cox” & Ray Winstone “Stanley” are satisfying enough in their respective roles as they interact well with Penn and hold their own – though I would have liked a bit more of a back story on their characters and when it does come, it’s almost as if it’s too late in the game for it. And let’s be truthful, no one does that bad-assed, grizzled, no BS English tough guy like Ray Winstone does.. It’s just never wrong. Sadly Idris Elba as “DuPont” an Interpol agent who wants Terrier to do a tell-all, is just basically a if-you-blink-you-miss-him character at the very end.

Though Annie is Penn’s AND Bardem’s love interest here.. Terrier had to leave her behind when he had to go into hiding per the ‘rules’ of the assassin’s creed they had. But truly, she has very little to her character and only seems to exist to be one of those helpless way-to-young for either guy, woman characters with a pretty face. She and Penn don’t really have all that great chemistry and I doubt the film would change much or you would even notice if her character wasn’t in it. 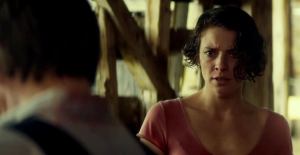 Structurally the film was a little strange and again as noted, convoluted. For the longest time it seemed like it was going to be a thriller but then turned into an action film about halfway through. The two halves of the film don’t really seem to add up or connect together so any scenes not building up to an action sequence feel a little like they are just killing time for the sake of the films run time. At times the plot seemed lost and overly complicated for what ultimately amounts to just a series of shoot outs.

The action scenes were impressive enough and had some good diversity to them in terms of location. The ending action scene in a bullfighting arena is pretty damn awesome if not a bit gruesome. I really don’t think I’ve ever seen anything quite like it before and might be the films only redeeming point to make it worth a watch…on VOD or DVD that is..