Opening this film with Philippe Petit (Joseph Gordon-Levitt) standing atop the Statue of Liberty explaining to us, the audience, what the lure of the twin towers is to him and why it’s the perfect place to ‘hang his wire’. All this is done with Levitt speaking directly to the audience a-la documentary style..but with none of the panache of “Man on a Wire” the documentary film made in 2008 about this same event.

So why you ask did Robert Zemeckis make this dramatized version of events from as it seems fairly pointless. Well that is the question I asked myself while watching throughout the film. While we do get taken into the beginnings of a young Philippe maybe even a little to much so, but we meet Papa Rudy (Ben Kingsley) as the man who inspired Philippe to begin his career in high-wire walking, how he meets the woman who supports him throughout Annie (Charolotte Le Bon), his main photographer friend Jean Louis (Clement Sibony) along with math whiz/acrophobic Jean Francois (Cesar Domboy) as well as Americans J.P. (James Badge Dale) Albert (Ben Schwartz) and scene stealer insurance/inside man, Barry (Steve Valentine).

Watching them plan the ‘heist’ is fun at best, though a bit long in the tooth for some scenes. It doesn’t build up the tension needed until Philippe actually begins ‘The Walk’ between the towers and it’s truly the main reason to see this film as to witness that spectacle itself which is delivered well with flair & excitement. The swooping and inventive movement of the camera does show exactly how daring this feat really was.

I will add though as well as that part of the film came off, some of the CGI/green screen was so poorly done that for me, it just couldn’t compare to the actual footage shown in the 2008 documentary where you see the real Philippe smiling and pulling off the stunts he did while 1300 feet in the sky.

The performaces will get no awards and it’s a bit frustrating at times to realize they could have used so many amazing although yes, lesser-known, but actual French talent that is there for the picking rather than US actors in the respective lead roles as the accent use can be rather jarring at times. But I get it, you need a name to carry your film. For me and I recommend this to anyone – see ‘Man on a Wire’ as it will serve your needs much better than this version.
The film would have gotten a lot lower grade from me had it not been for the honorable way they show the Towers in the light they did and especially the lovely homage scene at the end. 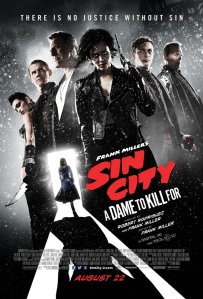 Ohhhh Robert Rodriguez..what happened to you since the days of “El Mariachi?” I loved that movie and the sheer basic-ness of it.  Even “Desperado” though somewhat amped up with bigger stars and all, showed you still had spirit.  “Spy Kids” was fun!! Then,..well somehow it became all green screen & well..’film noir’ if that’s what you would like to call it.  “Sin City”  a movie with so much art direction, enough decapitations to make the Roman’s say WOW! yet so very dull and uninvolving.

“Sin City: A Dame to Kill For” seeks to pay homage to the graphic novel  by re-imagining it as a feature film; unfortunately, the big screen and the 3D merely call attention to the aspects of the book that either don’t work or don’t translate easily from one to another because I got lost & a bit bored somewhere in there.  First of all, there’s the narration..ohhhhh so, so much narration, with so many monologues laid over soooo many scenes of people drinking, driving, grimacing or stripping without taking their bras off. (The latter being “Nancy” (Jessica Alba).  Add to all this a ridiculously thick layer of sexism, with every woman in the film portrayed as a prostitute, stripper or man-trap. There’s a policeman’s wife who dares to be over the age of 40, and is well then of course cheated on because ya know..that’s what happens to all women at that age (yawn),  a vengeance-driven dancer who has to mutilate herself to get a man to help her carry out her vendetta. Heaven forbid she do it on her own in a story like this. It seems to try to be a bit self-parody, but completely lacks the sense of humour required. 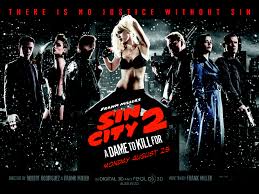 As with its the first “Sin City”, which was a whole (gasp!) 9 years ago, this sequel sees directors Frank Miller, who also wrote the novels, and previously mentioned Rodriguez shooting their actors on green-screen and surrounding them with so much animation, hyper-stylized lighting and art direction to make the movie look as much like a comic book as possible.  It’s a clever gimmick for about 10 minutes, but then you start noticing how the actors have been directed not to move their faces much, so that they’ll look more characters on a page.  The blank expressions (and again!! that crushing narration) merely point out the fact that lines like “She didn’t deserve a second thought — and I couldn’t get her out of my mind,” probably work much better on the page than they do when said out loud as they don’t work well.

The new hero is gambler “Johnny” (Joseph Gordon Levitt) beats corrupt politician “Senator Rourke” (Powers Boothe) in a big game at the poker table but comes to regret it. Rourke becomes a target for Nancy, because the senator killed her lover “Hartigan”(Bruce Willis) who appears periodically as a kinda passive-aggressive ghost, private eye “Dwight” (Josh Brolin) finds himself trapped by the over dramatic manipulation of his ex “Ava” (Eva Green), a femme fatale with a rich husband and a wicked soul.  While I’ve still yet to figure out what makes some think Green is so wonderful all of a sudden in the acting world because I’ve only seen some very mediocre acting, I will give it that she is the only female in this movie who seems to see through this movie’s ludicrousness and dares to one-up it. Her and Brolin’s nudity feels like it should be and they show a lot more skin than any of the strippers (thank you Josh!!:))  and she turns Ava’s greed into one of the few tangible objects in this movie made up principally of special effects. “Marv” (Mickey Rourke) brings a bit of soul to his role, a bit tough-guy with a heart.

This being Rodriguez’s second sequel in a row now, Machete Kills being the first, in which he turns sex, violence and general exploitation into a rather dull movies at best with yes, stars galore in it.  All either movie had to be was entertaining, but neither accomplished that task; so for a film loaded with decapitations and gun-toting ladies in bondage gear, Sin City 2 gets really tedious really quickly. But this genre definitely has it’s fans and they will probably love it whether it was good or bad.  On a side note: Did anyone else notice or be a bit well..skeeved out by the fact that Rodriguez once cast 13-year-old Alexa PenaVega as a spunky little Spy Kid but now gives the 26-year-old actress roles as a stripper or a whore…hmmm..maybe that’s just weird to me and yes I know. we all grow up..but this..I dunno..was just weird for me.  So as my friend Fisher said to me when I invited him to the premiere on Tuesday…”nah..the premiere party will be a blast with all those different people showing up, but the movie won’t be” and that my friends summed it up completely. Premiere party where I got to meet Demian Bichir who happened to be there and I am such a fan though he’s not even in the movie, was my most exciting moment, the movie…was not.