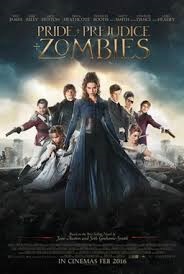 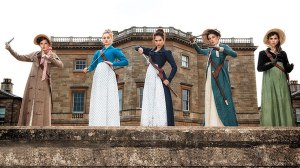 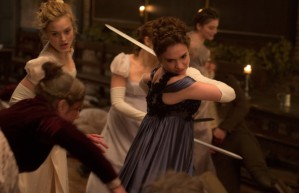 Lily James and Bella Heathcote in Screen Gems’ PRIDE AND PREJUDICE AND ZOMBIES.

And yes, this talented cast is all in. They play it mostly straight to achieve the balance between somber and silly. Lily James and Sam Riley again, are both fun to watch as Elizabeth and Darcy. They are the film’s best fighters with both swords and words. Jane (Bella Heathcoate) is “the pretty one”, who is wooed by the simply stunning Douglas Booth as Mr. Bingley. 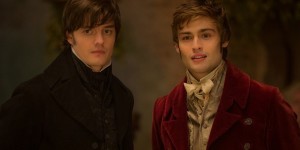 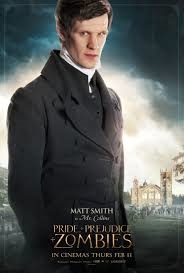 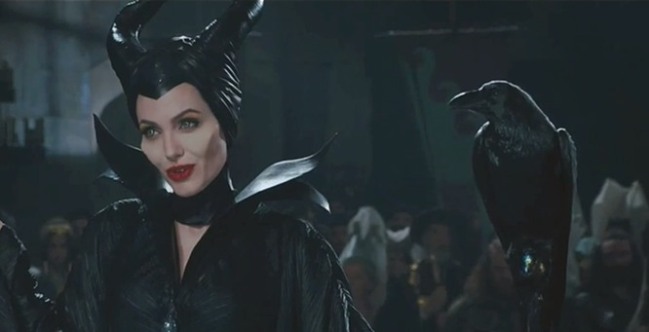 As far as fantasy movies go, I gotta say I pretty much liked this one minus of course, one or two little things..”Maleficent” is basically the modern day ‘prequel’ of the age old fairy tale ~ ‘Sleeping Beauty’  The villainess (or is she??) “Maleficent” played well by the beautiful Angelina Jolie, who lived a wonderful happy life as a fairy child with wings in a beautiful land where nothing bad ever happened.. Until…of course it does.  She faces the ultimate betrayal as a young woman, by “Stefan” (Sharlto Copely) who not only breaks her heart, but steals from her the one thing that makes her who she is, all in the name of greed and to obtain power and control over kingdom and win the princess.  Which he succeeds at, but of course there is a price to pay hence the story of ‘Sleeping Beauty’ The King & Queen have a beautiful child together,” Aurora” (Elle Fanning), and “Maleficent” being whom she is now, a bitter fairy with unbridled powers, puts a curse on the newborn child that on her 16th birthday she will prick her finger on a wooden spindle and fall into a coma and only can be awakened by ‘true love’, which of course she no longer believes exists.

The plot thickens as the years go by as it seems that “Maleficent” has a heart after all as she spies on the child who is growing up over the years in the care of 3 bizarre & irresponsible fairy’s, and realizes that the key to peace and possibly her own personal happiness, is after all, “Aurora”. She tries to break the spell which is now unbreakable..During all this time, the now “King Stefan” has made it his mission to destroy “Maleficent” and ensure his daughters safety.  Throughout these years “Maleficent” is accompanied by her ‘wings’ “Diaval” played by Sam Riley, who is so under-utilized here as an actor.  If you want to see what this guy is truly capable of, I suggest you watch “Brighton Rock”, “On the Road” or his stunning portrayal of Ian Curtis of Joy Division fame in “Control” and you will see what I am talking about.

Angelina Jolie is as good as you can be in bringing an animated character to life, and though most of the second act of this movie goes off half-baked somewhat with plot points that go nowhere and sorely lags a bit, but have no fear as it does pick up again in the finale portion of the movie. Still, it’s quite predictable in what the ending will be. The imagery of the fantasy land they live in is truly beautiful and stunning at times..it was probably my favourite thing of the whole movie.  Noteworthy ~ in a small but sweet part is Brenton Thwaites as “Prince Phillip”, I predict we will see much more to come of this young cutie pie, yes I just said cutie pie..:D