Here we are – Day Five of the ‘SEVEN DAYS OF OSCARS’ countdown and we are at ‘Best Actress”. Once again I give who I think will win – and what my pick would be – as those two choices sometimes differ.

ACTRESS IN A LEADING ROLE
NOMINEES

SALLY HAWKINS
The Shape of Water
Sally gave a truly wonderful performance here as she so comically put it when del Toro asked her to be in the picture at a party and said “Hey I have a film I’d like you to be in, you play a deaf mute who falls in love with a fish” to where she replied ‘Sure’ – I just love that. And no, I won’t be mad if she wins.

FRANCES MCDORMAND – MY PICK/WINNER
Three Billboards outside Ebbing, Missouri
Francis this little golden man is meant for you – and thank you for an amazing performance in this movie that I just loved.

MARGOT ROBBIE
I, Tonya
Margot – you were good in this film considering you had never even heard of Tonya Harding or Nancy Kerrigan. I just don’t think Oscar-type good and for me personally, I just can’t be onboard with the idea of celebrating Tonya Harding at all.

SAOIRSE RONAN
Lady Bird
Ms. Ronan has definitely proved herself to be a good young actress, she just happens to be in the category with some truly GREAT actresses.

MERYL STREEP
The Post
I feel like I go through this every year. We love Meryl, we love her body of work, just please stop using her as filler in the best actress/best supporting actress categories. sigh.

We are on Day 5 of my “7 Days of Oscars” – and into the Best Actress category.

Cate Blanchett, Carol
I mean it’s Cate. It’s rare that you will catch her in a bad performance. I liked her in ‘Truth’ earlier in the year, and while I didn’t love this film, she was as always, very good. Enough said.

Brie Larson, Room – WINNER
There isn’t really anything to add here from what I noted on my Golden Globes review. Nothing’s changed. I like Brie a lot, but I can’t truthfully think this is anywhere close to being a performance or film that should be here..but hey..again, my hopes are still up that maybe she will share the award with Mariska Hargitay from Law & Order:SVU if she wins.

Jennifer Lawrence, Joy
No offense to Jennifer here, as I do like her a lot and I’m sure she has many more awards coming in her career. This isn’t going to be one of them, and truth be told, wasn’t really strong enough of a role to really be here.

Charlotte Rampling, 45 Years – MY PICK
While this wasn’t my favourite film of the year as it was rather slow-moving, Rampling’s performance was simply put, sublime. If there were true Oscar gods, she would win! 😀

Saoirse Ronan, Brooklyn
While the story itself was rather sappy at points, Saoirse really was quite good here. It was what I would call a sweet-type performance and she would be my 2nd choice here.

Tomorrow, as we are coming close to the end of “7 Days of Oscar” and the Best Actor category.
Till then.. #Oscars2016 #peggyatthemovies

Ryan Gosling has always moved to the beat of his own drum..and in his directorial debut “Lost River” definitely shows you it’s no ordinary drumbeat that he’s moving to.

The once vibrant town known as simply as “Motor City”, Detroit is sadly now decaying and it’s newsworthy abandoned-house scary-ness, sets up the rather miserable and macabre foundation of this story of “Billy” (Christina Hendricks), a single mother of two, who is swept into this bizarro underworld trying to do what is needed to survive with her family, while “Bones” (Iain De Caestecker) her teenage son, discovers a secret road that leads him to a underwater town. 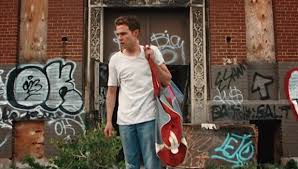 The broad overline of this ‘fairy tale’ gone bad, looks at the lengths to which a single mother will go to avoid defaulting on her mortgage. As her attempt to renegotiate terrible loan terms fails, and the sleazy wolf of this tale is her bank manager,“Dave” (Ben Mendelsohn), who not only will make you think twice about ever walking in to your bank branch again, but offers her work in the macabre vaudevillian fetish den he manages on the side. With “Cat” (Eva Mendes) as her “mentor” in this macabre world with scenes that will definitely not be for every one, as while they are shot in amazing fashion, not always easy to watch or even make sense for that matter. 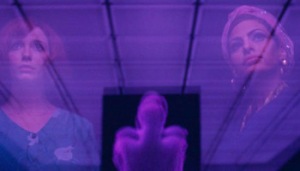 In the meantime, Bones is stealing metal scraps to fund the repairs to the broke-down vehicle that seems to be thought of as his only viable means of escape. At night, him and his wannabe girlfriend “Rat” (Saoirse Ronan) are stalked by local thug king “Bully” (Matt Smith), who sits atop an actual throne that’s affixed to his souped-up motor city chariot, in another case of where the fairy tale references are too roundabout and evasive.

All the while this two waaay different sides of the film is going on, we find out about an urban myth which blames the residents’ poor fortunes on a curse of bad town planning, which P.S. also gives you the meaning to the film’s (and the town’s) name. As Bones finds the existence of this underwater city, long since drowned out, he goes to retrieve a piece of it as this will ‘end the curse’

By this time, trust me, you are pretty lost in following whatever story/fable it is that is trying to be told here. Truly, see this film at your own risk. All I can say is Ryan Gosling, I adore you, but if this is what’s in your head..

Luckily for me, this was a Q & A screening and I got “Hot Fuzz” director Edgar Wright and Ryan Gosling himself to talk about the film. Gosling opened up about the process of making his first film, stating that his biggest surprise was the production timeline.

“I didn’t know it was going to take three years. You don’t know how to make a movie until you make one. As many as I’ve made as an actor, it doesn’t prepare you at all,” he admitted. “But that’s also the best part about it, the thing that I love the most. I got to spend this big chunk of time with this one thing. When you act, it’s amazing, but it’s a few months and that’s it. So the long game of it all was really a surprise to me, but in the end, it’s probably one of the best parts.”

He also noted that though he didn’t realize it, it was pointed out to him that it’s his version of dark ‘Goonies,’
Gosling also said he confided to director Nicolas Winding Refn, telling him that he wasn’t sure if the $5 million he raised to make the film would be enough; “$5 million?” replied Refn. “You can make ‘Star Wars’ for $5 million!” This gave Gosling the confidence to follow through with making the film. “That’s bullshit by the way,” Wright jumped in at the Q&A, referring to Refn’s claim.

Before he had even had a story in mind, Gosling started gathering footage around Detroit. Later, he wrote the script to accompany what inspiration he took from the decaying Detroit landscape. Gosling said he then took the footage and the story idea to director Guillermo del Toro, who told him, “If you don’t direct it, I will.” Gosling said he “felt like the wizard had given me my sword and my shield and sent me off on my mission.”

So at least I understand now the ‘how & why’ it got made, it didn’t change my mind about the movie I’d just watched, but it did make me hopeful that Gosling’s next venture will be so much more.