With this being the final film in the Apes trilogy saga ~ WOW! does this one have a lot to offer. From charactarization to extraordinary and beautifully done set pieces, along with spectacular next-level CG work that brings such realness to the apes. Of course it has flaws, but they are few. This truly shows how to respect original material, yet reinvent it in a way that enhances and sends it off in the right way.

If you are like me and have, whether secretly or not, always been cheering for the apes, you will love this movie. This movie has so much going on within itself the whole time, you will rarely find a dull moment. It starts with a bit of a prologue from previous films which I loved as it’s always nice to have a reminder – but done simply, clearly and precisly in a matter of a few short sentences. This will make it nice and easy for those who’ve not seen the earlier films in this series.

Of course, as the title dictates, it all starts with war. After the death of the man-hating Koba (Toby Kebbell) in “Dawn of The Planet of the Apes”, we find Caesar (Andy Serkis) looking to lead his klan to a new life where they can live in peace. But after a huge opening scene battle, where we see Caesar letting some humans live so they can take back an offer of peace to their commander known as The Colonel (Woody Harrelson). This offer is clearly rejected when they attack the apes and kill Caesars’ wife & son. And now it’s Caesar turn for revenge. Wanting to take this path of revenge on his own while sending the others off to find the peaceful land his son had found for them, he is unltimately joined by Maurice (Karin Konoval), Rocket (Terry Notary), and Luca (Michael Adamthwaite). Along the way they pick up Nova (Amiah Miller), a young mute girl (how she gets her name is a fun little plot line) and Bad Ape (Steve Zahn), an ex-zoo ape who doesn’t speak the ape language at all and truly adds the perfect bit of fun, zany bit of humour to a oft-times, dark film. We also find out, there was a disease that came after the plague, that cause humans to go dumb as in the case of Nova. This all builds up to the reasoning behind why The Colonel wants to completely exterminate the entire Simian community.

In the midst of all this, we also meet the newest addition to Caesars’ family, one that brings us back around to the very beginning. To those of you that don’t know Cornelius (Devyn Dalton), this goes back old school – we are talking Roddy McDowell/Charlton Heston Apes beginning circa 1968. Along with a few brief appearances by Koba – more of a mirage – reminding Caesar of things such as ‘ape does not kill ape’ and how hate bred inside of him and it didn’t end well, we have a good mix of old and new being brought together to wrap everything together.

As Caesar learns his entire tribe has been captured and taken to a work camp where they are put into forced labour to build a wall, he tried desperately to figure out plans to set them free. See, turns out that The Colonel has a completely different army coming after him because he is killing his own people, including his own son, for coming down with the new ailment that seems to be contagious to some. So what do the apes do? Well what we all should. They stand up and resist and through peserverance and brainpower, they outwit their captors to find their way out. There are moments that you can’t help but think of the narrative and where it leads to and how it matches so much in a way with our past and present state of our country politically.

As for acting, you would think with all the CG effects there really couldn’t be any, and while the human characters aren’t leading the ‘interesting’ pack here, there are moments when you swear Caesar is real. While there is predictability for sure, the very climatic ending is almost in two parts and while I scoffed for a quick moment at the 2nd part, it wasn’t a scoff of disdain but rather disbelief in a good way.

Just remember ~ No one comes out of this film well, after all it is a war.

**IMPORTANT NOTE: Stay for the credits — You won’t regret it!

Is it just me or does it just seem like writers might be a bit bored these past few years and are perhaps running out of ideas? Hasn’t this been done already and then done again? Or did the box office success of movies like Jurassic World inspire studios & producers to opt for remakes instead of the road not taken. Well I don’t have the answer to all those questions BUT…I didn’t hate this remake in all it’s CGI super-glory.

To be clear – Kong: Skull Island is not simply a remake of a film that has been re-made time and time again. It is kind of what you could refer to as an ‘re-imagination’ of the original. If you ever lost sleep at night wondering what it would have been like if King Kong was not sedated and taken to New York to be pointed and laughed at and swatted away little planes with a Faye Wray or Jessica Lange or hey..even Naomi Watts, in his possession. Well fret no more, as that is exactly what this film explores.

The premise here is it’s 1973 this time and a group of eager-beaver scientists discovers what they thought was an uninhabited island a LandSat (land mapping satellite) has taken pictures of. An elusive island called – you guessed it – Skull Island, that although rumoured to exist it’s never been proven to…until now. Bill Randa (John Goodman) and Houston Brooks (Corey Hawkins) are eager to be the first to explore and geologically map the island, so they persuade the US government to back the expedition by supplying them with the support and expertise of some US Army soldiers under the command of Lieutenant Colonel Packard (Samuel L. Jackson) and his team, Chapman (Toby Kebbell), Mills (Jason Mitchell), Cole (Shea Whigham), Slivko (Thomas Mann), to name a few of the supporting crew, who are conveniently just leaving Vietnam and can stop on over. They also pick up a British ex-special forces “tracker” James Conrad (Tom Hiddleston) a former British Special Air Service Captain and an “anti-war” photographer Mason Weaver (Brie Larson). 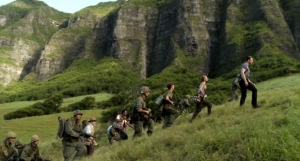 They start the mission by dropping bombs on the island to map the bedrock, ostensibly to look for mineral deposits. That’s when Kong shows up to smack the helicopters out of the air, and generally wreak mayhem on the team. The scattered survivors then have to survive on an island filled with oh-so-many-monsters and have to try get to the extraction zone. One group finds Hank Marlow (John C. Reilly), who brings a well-done dose of humour to the production and who has been stranded on the island for 29+ years with all the non-speaking island natives where KONG is ‘god’ and most definitely King of this island. 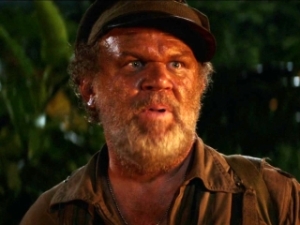 And that’s about all I’ll say about the story, so as to avoid serious spoilers. The story line is fairly conventional with very little arc to the characters except just as in the past, you ARE cheering once again for KONG. In many regards it actually sets up more like a horror movie than action/adventure movie. In fact, there are numerous jump-scares and other basic horror movie devices throughout the movie. Sorta of reminded me of the old school Godzilla vs. whomever monster films and while KONG might be the main guy, he is definitely not the only monster in town here.

In some ways, it felt like the movie couldn’t quite decide what it wanted to be between a monster movie and a horror movie… Or was it an action movie with an anti-war theme? It’s a toss up. There are also numerous characters who seem like they were intended to play more significant roles but then don’t. For instance they bring along a biologist, San (Tian Jing), who does no absolutely no biology (or good acting) at all and seems to mainly appear to allow another character to give a statement of sorts. Similarly most of the LandSat team seem to be around for comic relief, even if it is just horror movie style comic relief. Even some of the major characters do little aside from provide a single plot piece and I’m sure you can already guess, no one is going to be winning any awards for acting from being in this pic. 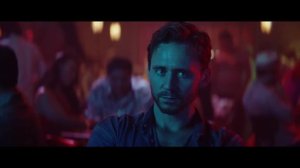 As for KONG himself, I think they could have spent a bit more time developing him, partly as a character as again, his name is in the film’s title after all. The CGI was quite good not only for KONG himself, but his fellow monster buddies as well.

I think there might have had just too much going on, and not enough time for this movie to be really good. As it is, it’s an entertaining enough of a movie that is fun, if you go in with a somewhat low-bar intention, so I enjoyed it completely on that level alone.