If like me, you are someone who is completely conflicted on something like the death penalty, “TRIAL BY FIRE” might just be the movie for us all to see.  My conflict mostly arises from the fact that for me, anyone who hurts a child just shouldn’t get a second chance ever.  Yet, as we know from such wonderful trials as OJ Simpson or Brock Turner’s, the justice system is flawed and while some cases are cut and dry guilty, some aren’t.  Hence the story of imprisoned death row inmate Cameron Todd Willingham (Jack O’Connell).  Willingham is a poor, uneducated heavy metal devotee with a violent streak and a criminal record to boot.  He is convicted in the arson related death of his own three children in 1992, deaths so awful a swift accounting for is demanded and given and Willingham is sentenced to death with the ‘justice’ system moving with particular swiftness and speed in this case.

What follows is the overwhelming story of this mans life.  Showing him to be the angry and flawed human that he is.  Chronically unemployed or employable to say the least, he is a brawler, womanizer, and yet the caregiver to his three children because he won’t or can’t work, shows another side to him.  Even wife Stacy (Emily Meade), while being the breadwinner of the family, notes that this is a man who loves his kids.  Being that she is away the morning of the fire that engulfs their home and the three children, while Willingham makes it out alive, gives her character the sympathy that is deserved.  But is all really as it seems or does the law just adjust their crime scene to fit the narrative they want to convict.

This is where the story truly picks up what happens when they do decide this and because justice is wanted so badly, that no other scenarios are even discussed.  Except for the small fact that Willingham has never given up on the fact that he is innocent.  Investigators claim to find evidence of a fire accelerant. A jailhouse snitch reports that Willingham confessed to the crime, and during the trial, a disinterested public defender repeatedly advises Willingham to avoid the death penalty by pleading guilty. When Willingham refuses, the lawyer loses interest. No serious defense is mounted, and Willingham finds himself on death row, awaiting lethal injection in Texas, a state that likes to keep the line moving.

Alone and isolated in prison, when through a random encounter with someone who knows about the case, a woman named Elizabeth Gilbert (Laura Dern),  volunteers to correspond with him, hears his claims of innocence, and trying to do the right thing, she re-investigates his case, even though the obsession with it all leads to the detriment of duty to her own family home life.  She uncovers what looks increasingly like a shoddy investigation (the arson “evidence” is refuted) and slippery prosecution, even showing the jailhouse snitch recanting.

Even though I might have an issue with performances of many Brits/Aussie’s trying to play the southern accent, the performance here by O’Connell goes beyond that.  He plays Willingham as wronged, but you find heart in him as the story unfolds.  Emily Meade is secondary only in the fact that she plays his wife who shows throughout that she too, is conflicted by what might or might not be the truth.  Dern, though the ‘victorious’ character you could say, still comes off as a bit bland and even though its true, you wonder why she took this interest and it’s never really told to you.  That could be the fault of director Edward Zwick though, as the movie evolves without really showing us the messiness of real life in-between the lines.

The movie allows that Willingham can be innocent and still be manipulative and angry and flawed, and concludes with a wallop of emotion as Willingham is executed all while waiting for a Governors stay of execution.  A significant point made in the end titles is that for all means and purposes, Willingham is notably innocent, hence my referral back to being so conflicted by something like the death penalty, because it’s just not 100% fool-proof.

“TRIAL BY FIRE” IS NOW PLAYING IN SELECT CITIES

For a movie with the very real backdrop of the US housing market crash, with such believable characters, 99 Homes gives us the story about one man’s struggle with the housing market catastrophe and is the subject of what Ramin Bahrani’s new film is all about. It is at once sad, heart-wrenching and at the same time, somewhat terrifying to watch.

As the movie opens, we see a real estate guy explaining to an Orlando cop how the owner of the house he came to foreclose on, ran inside and shot himself in the head. We then get to know Dennis Nash (Andrew Garfield), a construction worker who gets laid off and before we know it, his family home gets foreclosed on, and Nash, along with his young son, Connor (Noah Lomax) and mom, Lynn (Laura Dern) end up moving into a motel. Desperate for money, Dennis turns to the real estate guy who foreclosed on him, Rick Carver (Michael Shannon), and actually starts working for him. 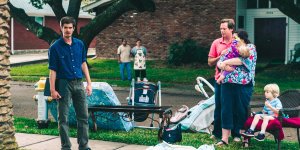 Let me be clear that I am appalled at what happened, that the banks made serious mistakes, and there hasn’t been nearly enough accountability for what caused the second biggest Recession in history. And while this film isn’t fool proof by any means, it does give you the feeling of being at least a somewhat accurate image of how different the concept of “money” is for everyone. Some people are set for life where others are living paycheck to paycheck. This film seems to know and show both sides of that so well.

99 Homes is a film that’s main topic is eviction and really this should have been dull ride. How this film is able make this topic interesting and thought-provoking is quite impressive. It’s also a complete character study that truly makes you think who is the good guy and who is the bad guy. Michael Shannon’s performance is spellbinding and for me Oscar nomination worthy. Garfield is good, but again, it’s Shannon who really controls the screen when he’s on it he holds you in the palm of his hand for the entire time he is on the screen as he plays the villain well making you give thought if he really is just that or just a product of the environment that was created as he shows you both sides of the coin. 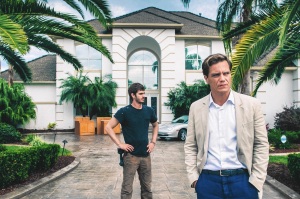 It is also societal story and commentary, and a story of determination all rolled into one. There are literally are 99 reasons to go see this movie. 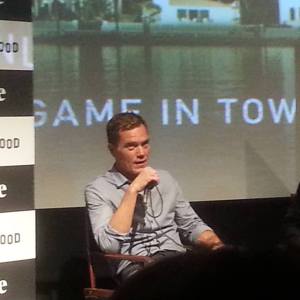 I just adore this man and have for so long now. I call him my go-to guy as I wish he could be in almost every movie. He’s a gem and simply a fantastic actor & I love his touch of sarcasm, witty, ‘no bullshit’ attitude that he even brought to this Q & A. He really went in depth about how he felt his character here was truly a guy you could hate, but yet explained it so well in that he never wanted to take people’s homes as he was a real estate agent and wanted to put people in homes, yet when everything crashed he could either do what he did, or be a victim also. He chose the road he did and Shannon hopes that he was able to give you the portrayal that showed this in his character and he might have actually been relieved at the end. Shannon, through his dry humour & wit, can make you laugh and then next minute be serious. He noted he truly doesn’t like discussing ‘acting’ per se’ and for those of you who loved him in “Boardwalk Empire” he noted while he loved doing it, he would probably never do TV again. My note to all: If you have the chance to see ‘Iceman’ – DO! Shannon’s performance is as good as it gets.