So had a few extra hours on Thanksgiving and yes, I finally saw “Interstellar” and boy was it LOOOOONNGGG really really long. Which would be fine if the first two hours were something special moving at a pace faster than the tortoise and the hare race. Mind you I pretty much love all of Christopher Nolan’s movies starting with the 1st one I really remember, Memento, which I thought was just so damn brilliant. Love the Batman franchise, loved Inception and actually got it (well okay..kinda got it) 🙂 But this one raises a few questions for me..one of the most notable is why does he like Anne Hathaway aka Anne – don’t forget the ‘E’ aka Anne Hackaway, so much?? She was the worst Cat Woman ever, and does no favours in this movie either..so why? ok..well as I will most likely never have that question truly answered..let’s move on.

At the beginning we meet “Cooper” (Matthew McConaughey) who is a widowed farmer/ex-astronaut, his young daughter “Murph” (Mackenzie Foy) who believes her room is haunted by a ghost who is trying to communicate with her; his father-in-law, with whom they live, “Donald” (John Lithgow) and his son, who is almost as an after thought, “Tom” (Timothee Chalamet). I say afterthought because the story heavily focuses on Cooper’s relationship with his daughter throughout the entire movie as they even label it as a sort of 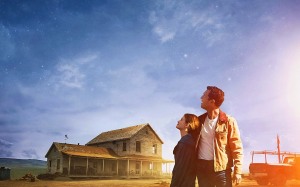 ‘father/daughter’ story, and I almost felt bad for the son as he isn’t prominently featured at all. But I guess that’s neither here nor there as we move along through their story where there is a school reprimand involved, which leads into a school suspension whereas Cooper & Murph then have the time to be ‘discovering’ that the ghost is actually sending them coded messages that gives them the coordinates to find which takes them on the journey where they find the secret bunker so-to-speak of NASA. See the world is almost at an end and with crops blights left & right, taking away food this planet will never see again, time is running out to figure what to do next and possibly where to go.

In steps “Professor Brand” (Michael Caine) and his daughter “Amelia Brand” (Anne Hathaway). Prof. Brand explains to them that a wormhole apparently created by alien intelligence, has given what’s left of Earth’s inhabitants hope for survival and that NASA’s old ‘Lazarus’ missions have noted 3 different planets orbiting the Black Hole ‘Gargantua’ that are potentials for human habitation.

To cut a really long story as short as can be done because I will be honest, not only would it take pages to describe the entire film (as some reviews have done..ZZzzzzz), the first two hours of this movie did not wow me in the slightest and somewhat dragged on. As they mount a mission to find which planet is best. The mission named ‘Endurance’, is where Cooper joins Brand’s daughter, biologist Amelia; scientists “Romilly” (David Gyasi) and “Doyle” (Wes Bentley); and robots TARS (voiced by Bill Irwin) and CASE (voiced by Josh Stewart). The TARS & CASE robots were pretty much my favourite ‘characters’ of the movie btw.. so to sum it up..they enter the wormhole and head to Miller, but discover the planet is so close to Gargantua that it experiences severe gravitational time dilation: each hour on the surface is seven years on Earth. It’s inhospitable to humans as it is covered by a shallow ocean roiled by enormous tidal waves. As Amelia attempts to recover Miller’s data, a wave hits, killing Doyle and delaying the shuttle’s departure. When Cooper and Amelia return to Endurance, 23 years have passed.

On Earth, the now-adult “Murphy” (Jessica Chastain) now a NASA scientist assisting Brand who, on his deathbed, Brand admits he already solved the problem and determined the project is impossible and he covered up his findings and put his faith in a “Plan B” As Murphy tries to warn her also now adult aged brother Tom, (played by Casey Affleck), and his family that it’s almost at the end of time and they must move on she concludes that Brand’s equation could work with additional data from a black hole’s singularity. (yes I had to look up this last sentence :))
Low on fuel, Endurance can only visit one more planet before returning to Earth. After much argument the team votes for Mann’s planet, but they find it to be icy and inhospitable. “Mann” (Matt Damon) reveals that he knew Plan B was the mission’s goal all along, and faked data about his planet so Endurance would rescue him which of course goes awry, and Damon’s odd character turn here as a villianous bad guy fails and he’s gonzo!

As they are nearly out of fuel, and this is truly where I got the most frightened as there is a moment where you think that Hackaway’s character Amelia, is going to be the last person left to live. Frightening truly frightening thought for most of us, and yes I am being completely facetious here..or am I.. ha! It’s also where the movie FINALLY started to pick up some and get to the brilliant part as they emerge in an extra-dimensional “tesseract”, where time appears in different dimension with portals that show glimpses of Murphy’s childhood bedroom at various times. Cooper then realizes that the wormhole and tesseract were created by a future form of humanity transcending time and space, so he was the one and now again, that did and can communicate with Murphy as the “ghost” and try to save humanity. Using the gravitational waves they discovered early on a watch, Cooper transmits TARS’s data to the adult Murphy through Morse code, allowing her to solve Brand’s equation and evacuate Earth.
Years later, Cooper awakens aboard a NASA space habitat and reunites with the now elderly Murphy (Ellen Burstyn), who has led the exodus and Earth is to be saved. Lastly, Cooper does have to go out on one final mission, to find Amelia who is still out there on Edmunds planet. hmmm.. Do I see a sequel here?!! 😀

There are no stand-out performances here. McConaughey, coming off a fantastic 2013 with crazy good performances isn’t going to get any nominations for this role as it’s rather basic. Thankfully Chastain steps up to the plate to relieve us of the agony that is Anne Hathaway (Hackaway) and as the young Murph’s, Foy also does quite well. Visually, as expected, the film can be quite stunning, but mostly only once they get into space. I appreciated Interstellar’s grand ambition and the fact that Nolan took on astrophysics and a major studio gave him $200 million to do it. If anyone could try to tackle relativity and the space-time continuum in a narrative, it’s Nolan and his intellect as a director. But, alas it proved too much to take on and make sense of, even for him. It’s is however an interesting effort worth seeing just for its concept in general, though some may end up feeling merely puzzled, which, as my friend Leif noted, knowing Nolan’s oeurve is probably the whole point.