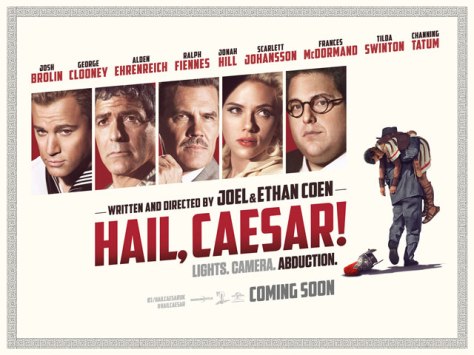 All Hail Caesar!!!
This Coen Brothers satire of old school Hollywood is a perfectly done mix of what our imagination might conjure up of what the Aqua-musicals or dance sequence films from the ‘Golden Age of Hollywood’ could be if they were done today.

The film centers around physical production/studio head Eddie Mannix, played by Josh Brolin. Mannix is a fixer at the fictitious Capital Pictures in the 1950’s. This involves him dealing with numerous egos, including their box-office superstar Baird Whitlock (George Clooney) and Aqua~movie starlet, DeeAnna Moran (Scarlett Johannson). Not long after the film begins, Whitlock is kidnapped and Mannix begins his quest to get him back with some surprising help along the way from young western actor, Hobie Doyle (Alden Ehrenreich).

With a top notch billed cast, you do tend to notice that some of the names receiving top billing, are only in it for short pieces of time or literally there for only a ‘blink-and you missed it’ moment – as such is the case with Jonah Hill’s character Joseph Silverman. Besides that odd glitching, all the supporting cast as a whole are just plain good and you don’t get a bad performance from anyone as even the normally so wooden Scarlett Johannson plays her small part well and unannoying.   Aside from the names mentioned, you’ll also see Ralph Fiennes being spot on as director Laurence Laurentz, Tilda Swinton doing hysterical double time as bickering twin gossip columnist sisters, Thora & Thessaly Thacker. Channing Tatum for whom I must say,  I love where he is taking his career with roles like this, truly dazzles with his singing and dancing number that is so beautifully done it makes you not only yearn for those times of past, but want them back if he keeps doing this.

Brolin is fantastic in the lead role and turns what could be a very unlikable character into a very endearing and sympathetic one. The real find among the cast is Ehrenreich. The character of Hobie Doyle is simple enough but Ehrenreich manages to turn him into one of the more amusing and interesting characters you’ll find in this film.

All in all I truly enjoyed the film as a whole and I’m guessing all Coen Bros. fans will thoroughly enjoy it.  However as a second note, my guest didn’t like it as much and he made a good point.  That he didn’t ‘get’ all the innuendos of some of it and said the general public as a whole might not either as it might have that ‘going over their heads’ problem.
For me, I highly recommend this Golden-Age romp through the glory days of Hollywood..
Grade: B-
@pegsatthemovies
Review Screening: Tuesday, February 2, 2016 ~ Courtesy of Universal Pictures
Nationwide release: Friday, February 5, 2016