“LOVING” tells us the long overdue, true story of Richard (Joel Edgerton) and Mildred Loving (Ruth Negga).
The story takes us through the years of what their lives were like while going through the some of the process of their plight to just want to be legally married in 1958’s deeply segregated southern state of Virginia. This was a time and place where this wasn’t legal nor could inter-racial couples even date. 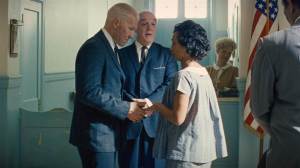 This story is silent, yet strong in its portrayal of the real-life interracial couple at the center of the 1967 Supreme Court case of Loving v. Virginia. It’s moving at times and loudly states the facts bluntly: love is love is love ~ and that should be enough.

And yes, while it can be quietly brilliant and amazing at times, it does have holes in the story that could have been filled. Mildred is portrayed at the beginning as being a doe-eyed, non-speaking, almost non-existent part of the beginning of this young relationship that in 1958 would have had racial consequences and problems within both communities. None of which is really shown at all until the last 20 minutes of the film when Richard finally finds a brick wrapped in paper on his car seat, mind you not thrown, just lying there. They missed some opportunities to really show us what the racial hardships might have been instead choosing to almost make the legal battle look far too easy with their lawyers Bernie Cohen (Nick Kroll) and Phil Hirschkop (Jon Bass) on whom the casting here might have been a bit of mis-step for me (not to mention their clunky and too “cutesy” dialogue).

What IS so very important about this film, and a big factor that not just everyone, but specifically why young people need to see this so they understand what our country was like back in the day. For gay people who have struggled to love whom they choose, they need to see that their struggle was not unique and needs to be supported. And that the bible was also used against interracial marriages. And yes, that struggle is struggle and unless we want the clock turned back, so we can “make America great again”, we must be ever vigilant. 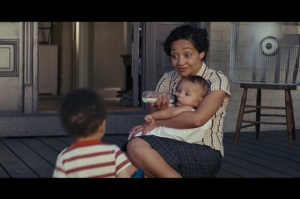 The most poignant and beautiful point of the film came for me towards the ending, in scenes that were so quiet, yet so powerful, showing that even though they were faced with obstacles set over and over in their path, they were resolved to show that their love and union was unaffected by those outside forces, and continued to move through everyday duties such as mowing the lawn, their children playing, doing the dishes, on the very day no less, that they receive the phone call that simply changed everything. It simply touches and yet rocks you at the same time.

The performances from Joel Edgerton and Ruth Negga while well done, once again, we have in an Edgerton, an Aussie and Negga who is Irish/Ethiopian, trying to pull off down-in-the-back-bayou southern Virigina accents which yes again, can be outrighted spotted in parts. (Side note: Truly, when was the last time we actually heard Edgerton speak in his regular accent? I can’t even remember if I have at this point). And truly, no matter how small the role, I love when Michael Shannon as LIFE magazine photographer Grey Villet shows up in anything.

If you want high dramatics, this is not your movie. I left the theatre feeling overwhelmed by the need to vote for our next U.S. President and make sure it is someone who will appoint progressive and unbiased Supreme Court Justices. I think most will understand that feeling, especially with so many people’s rights hanging precariously in the balance right now as it did then.
If you are looking for a touching, loving story that truly reflects so much on today’s times and the change that was accomplished by this one law that didn’t just change their lives, but the lives of millions of people around the world with whom it still affects today, this is your film and a film for all to see and truly reflect on.