I am a member of a club. A club that has enjoyed watching Robert Redford at every stage of his career. I’ve seen all his movies, many more than once. I’ve always adored him while enjoyed watching him onscreen and truly have always thought he didn’t get enough critical acclaim as an actor, but was tossed off as the ‘pretty boy’ for many years. For me, he has always been completely underrated and although he’s no longer the stunning young man he once was, he retains every bit of the star quality that blossomed sixty years ago earning every single wrinkle in his face which remains untouched by any markings of things done by many similar in age.

The Old Man & the Gun is a vehicle for Redford in the best sense of that term, a good story that showcases its leading man to best advantage, though not perfect in doing so for its supporting characters development along the way. Redford acquired the screen rights to this surprisingly true story and then brought it to director David Lowery, with whom he teamed with before. 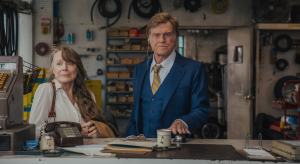 Redford plays an unlikely character in Forrest Tucker, a gentleman bank robber, and a fairly good one at that. Though he’s been arrested sixteen times, he’s also managed to escape every single time. He is so unassuming that no one suspects him when he saunters into a bank about to ply his trade. But the film is really just about a man who doesn’t have many years left in his life and simply wishes to do what makes him happy. Robbing banks in the most polite way that he possibly can, without ever harming anyone, and pretty much always getting away with it, and finding time in-between to charm Jewel (Sissy Spacek). Redford is well supported by Casey Affleck as John Hunt, a police officer who is on the robbery detail and whom is completely determined to nab this guy and put him away for good. Waller (Tom Waits) and Teddy (Danny Glover) are Tucker’s partners in crime, though again, I wish their characters were just a bit more on the developed side. And while Spacek’s role as the widow who doesn’t approve of what he does, but also can’t help falling under his spell, is truly quite wonderful most especially in one specific scene when they are sitting opposite each other in a coffee-shop booth. His eyes are so alive it’s positively dazzling and she responds to this so perfectly. This goes far beyond an two actors reading lines. There is a magic here and the combination of her and Redford is just that, quite magical. If the rumours are true and this really ISN’T his last film, I would love to see them work together again.

For as slow as this film sometimes is, as it’s not perfect, especially if it was a ‘retirement film’, it still never me once had me checking my watch. This 90-minute film flies by, even with its slow pace. And again, it’s Redford – I’ll leave it at that.

Media Review Screening: Monday, September 24, 2018 ~ Courtesy of Fox Searchlight
“THE OLD MAN & THE GUN” IS OUT NATIONWIDE // WORLDWIDE RELEASE TO FOLLOW IN OCTOBER