“A Star is Born” version 4.0 is here. And with it, we get not only Lady Gaga, but Bradley Cooper in his directorial debut doing double duty as lead actor as well. Straight off the bat I have to say this was a fantastic film with deserved praise for both its stars performance and their chemistry. The rise of fame from Gaga’s character to the declining career of Cooper’s was a roller-coaster ride of emotion. And the soundtrack can be just summed up as WOW!.

This 2018 updated version is very much in tune with today’s world and thankfully so, as I can only confess to seeing the last two versions and they were too kept in time with the day/age of music of that period. The first half of film for me is certainly the strongest part as we get to meet our main characters Jackson Maine (Bradley Cooper), a musician who is struggling to cope with his life and Ally (Lady Gaga), who thru a through a random stop, meetup where she is performing at a drag bar that Maine stops in while in an alcoholic stupor, for just one more cocktail.

We get a very good supporting cast here who all stand on their own in their parts of the story. Once again, I am impressed by Andrew Dice Clay’s performance – something I’d never thought I’d see or say, as Ally’s father Lorenzo. Her sidekick throughout the film is Ramon (Anthony Ramos) and her manager who takes her down fame’s sidewalk Rez (Rafi Gavron). Cooper has his own great support in Sam Elliot as his much older 1/2 brother Bobby. Bobby is the one who has picked Jackson up off the ground – literally – and wrapped him up at night before any major damage can be done.

Cue to the second half of the film. While still great does have more than a few cliche moments which can be a bit distracting especially if you have seen the other versions. Coopers directorial eye is certainly great capturing some great brilliant musical performance shots and always capturing the characters emotional thoughts. I certainly would have liked more Dave Chappelle scenes and loved the different type of character he played.

If I had to sum up this film – acting/directing/story/soundtrack in the best way possible it would be as follows: Gaga out-sings Cooper by a long shot, though make no mistake, he does a passable job. But Cooper on the other hand, out acts Gaga – who again, does well for a first time starring role – but cannot compete with either Streisand or Garland’s previous acting performances while her voice is just as comparable. Realistically speaking, those two are a tough act to follow for ANYONE. I know everyone is screaming Oscar, but personally, and again this is just me, I think it might be to early to call that yet – though it’s all a possibility.

While it’s a very tough job to pull this off as this type of story was maybe thought to have been done to death, but truly congratulations to all on a job well done.

I am a member of a club. A club that has enjoyed watching Robert Redford at every stage of his career. I’ve seen all his movies, many more than once. I’ve always adored him while enjoyed watching him onscreen and truly have always thought he didn’t get enough critical acclaim as an actor, but was tossed off as the ‘pretty boy’ for many years. For me, he has always been completely underrated and although he’s no longer the stunning young man he once was, he retains every bit of the star quality that blossomed sixty years ago earning every single wrinkle in his face which remains untouched by any markings of things done by many similar in age.

The Old Man & the Gun is a vehicle for Redford in the best sense of that term, a good story that showcases its leading man to best advantage, though not perfect in doing so for its supporting characters development along the way. Redford acquired the screen rights to this surprisingly true story and then brought it to director David Lowery, with whom he teamed with before.

Redford plays an unlikely character in Forrest Tucker, a gentleman bank robber, and a fairly good one at that. Though he’s been arrested sixteen times, he’s also managed to escape every single time. He is so unassuming that no one suspects him when he saunters into a bank about to ply his trade. But the film is really just about a man who doesn’t have many years left in his life and simply wishes to do what makes him happy. Robbing banks in the most polite way that he possibly can, without ever harming anyone, and pretty much always getting away with it, and finding time in-between to charm Jewel (Sissy Spacek). Redford is well supported by Casey Affleck as John Hunt, a police officer who is on the robbery detail and whom is completely determined to nab this guy and put him away for good. Waller (Tom Waits) and Teddy (Danny Glover) are Tucker’s partners in crime, though again, I wish their characters were just a bit more on the developed side. And while Spacek’s role as the widow who doesn’t approve of what he does, but also can’t help falling under his spell, is truly quite wonderful most especially in one specific scene when they are sitting opposite each other in a coffee-shop booth. His eyes are so alive it’s positively dazzling and she responds to this so perfectly. This goes far beyond an two actors reading lines. There is a magic here and the combination of her and Redford is just that, quite magical. If the rumours are true and this really ISN’T his last film, I would love to see them work together again.

For as slow as this film sometimes is, as it’s not perfect, especially if it was a ‘retirement film’, it still never me once had me checking my watch. This 90-minute film flies by, even with its slow pace. And again, it’s Redford – I’ll leave it at that.

Media Review Screening: Monday, September 24, 2018 ~ Courtesy of Fox Searchlight
“THE OLD MAN & THE GUN” IS OUT NATIONWIDE // WORLDWIDE RELEASE TO FOLLOW IN OCTOBER

And your comedy-date movie for the summer is…(drum roll please) “Trainwreck”!!

Written by and starring this year’s comedic ‘it-girl’ Amy Schumer as “Amy” it chronicles the misadventures of its leading character as she runs through boyfriends, numerous sexual encounters acting all the while as a chronically commitment-challenged career woman, is some serious comedic gold. When her boss “Dianna” (an unrecognizable and hilarious Tilda Swinton) assigns her a story to feature a young sports surgeon “Aaron” (Bill Hader) something happens to Amy she didn’t know was possible…she falls in love.

The film romantic-comedy side solely rests on the perfectly imperfect character of Amy who I think we can all relate to – as either being it at some point in our own lives or in someone we know. I mean let’s be truthful here … who of us ladies hasn’t walked into a room inappropriately dressed or sat at a baby shower giving a big eyeroll at the “my life is perfect” banalities and so wanting to shut it down. Amy is that girl, the friend we love to have around because she isn’t afraid to do or say what we wish we had the guts to do or say…though she pretty much goes overboard every time and that goes double here and yes, that’s why we love her.

Schumer is a force here, knocking every gag out of the park but also displaying some quite impressive dramatic skills that one doesn’t expect from a stand-up comedian. Bill Hader is finally given and masters the lead role he deserves perfectly. He is lovable, relatable in every way and is the perfect match for Amy on the big screen. Their chemistry here is undeniable. 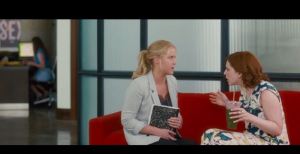 The supporting cast of the film is absolutely solid. Brie Larson is wonderful as “Kim” – Amy’s sister, Colin Quinn is “Gordon” Amy & Kim’s dad, Mike Birbiglia is “Tom” Kim’s husband, and the little scene-stealer child Evan Brinkman as “Allister” rounds off the family. Vanessa Bayer’s “Nikki” is Amy’s co-worker and just as on SNL, she holds her own here.
But perhaps the biggest surprise of the film is are the 2 big name athletes of the film in LeBron James 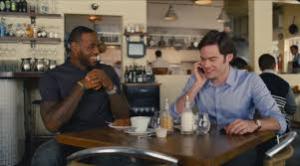 playing himself and John Cena as “Steven” one of Amy’s flings that you just can’t help but love while grabbing a scene your eyes won’t soon forget. And while I don’t know or follow basketball much (just like Amy in the film I might add) I do know who LeBron is and as it turns out the basketball superstar’s comedic timing is might just be as impressive as his game. The plethora of SNL cast, athlete and musician cameos were a welcome bonus to the movie.

By now we know that with a Judd Apatow films you’ll get a nice blend of raunchy humor and heart. It is a tried and true formula – and it works again here but with something different and that’s Amy Schumer. Sure there might be a few uneven moments..but the duo here help create one of the funniest romantic comedies I have seen in a long time with one of the most fun finale scenes I’ve had the pleasure of seeing all year long. Most of all – I think we can all say a big HELLO to Amy Schumer – “Moviestar” when this hits theaters.. 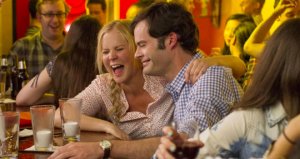 This film is fantastically fun, full of laughs, new one-liners for you to memorize and a sweet story to prove that yes, my friends, there is someone for everyone in this world.