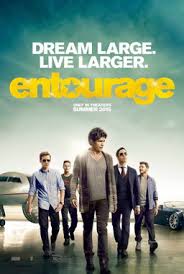 From the first opening scenes I’m guessing most will know immediately whether or not they will enjoy this film as before the opening credits even roll out we are caught up in the middle of a huge celebrity filled party scene as “Vincent Chase” (Adrian Grenier) is on a multi-millionaire’s yacht celebrating the end of his 9 day marriage with his friends zooming over on a speedboat to join him with nary a girl who’s not supermodel beautiful in sight. Life’s clearly a bitch for these guys.. 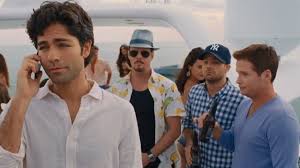 Entourage – based on the very popular HBO series that ran for eight seasons, is a fun, fast-paced, energetic look at both sides of the Hollywood machine. Side 1: The glamorous side of fast cars, nice homes & copious amounts of sex; Side 2: takes a really good peek at what goes on in behind-the-scenes deals that go down just to get films made. At 104 minutes long, there is not a moment wasted in packing in a ton of stuff into this glittering ride of a movie. The party scenes are fun, the dialogue is sharp and biting and the actors inhabit their respective characters well.

So remember ‘Medellin’? The film fiasco that was portrayed on the series that almost put a halt to the career of Vinnie Chase. This film picks up from the that as we once again takes a look at the lives of movie star Vincent Chase, his agent (now studio executive) “Ari Gold” (Jeremy Piven) and his group of cronies “Eric aka ‘E'” (Kevin Connolly), “Johnny Drama” (Kevin Dillon) and “Turtle” (Jerry Ferrera) who surround him. This time, the boys are making Ari’s first blockbuster picture ‘HYDE’ with Vince being not only the lead actor but in the directors chair as well. Everything threatens to go off the rails when the movie goes over budget. To get more money for the production, Ari has to go and deal with difficult Texan financier “Larsen McCredle” (Billy Bob Thornton) and his son “Travis” (Haley Joel Osment). Meanwhile, E is dealing with multiple pregnancies, Turtle is trying to court UFC fighter Ronda Rousey, Vince is dealing with his relationship with Emily Ratajkowski and directing his first major film for Ari, and Drama is coping with his stagnant career and a leaked sex tape. It’s all light fun, accompanied by fast cars, LA icon sightings and an absurd amount of celebrity cameos that if you blink you just might miss one of them. 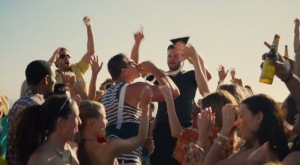 With various plotlines moving throughout the film, the party scene that occupies much of the middle section of the film is fantastic and the script really starts to move at a faster, funnier pace. But it’s always Ari who brings the film together. He is by far the most compelling character in the film, always ranting and raving, shouting an incessant amount of profanity at his co-workers while dealing with crazy financiers. Piven is a true scene-stealer, spouting off as much as he can and having a lot of fun with the role. As for the other four principle stars, they’re great together, and while it might take you a moment to recognize child-star Haley Joel Osmont, he does really well in this unexpected character turn with perhaps the meatiest co-star role out of all the actors, getting the chance to portray an immature Texan kid overwhelmed by the celebrity lifestyle. 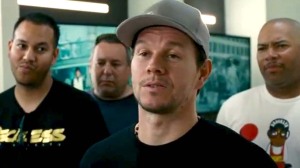 While this film is far from a masterpiece by any means, it did keep me smiling throughout with some very funny moments, great dialogue and simply put – it just all works. It’s a good summer diversion that delivers everything you want from a movie like this.. a good time.