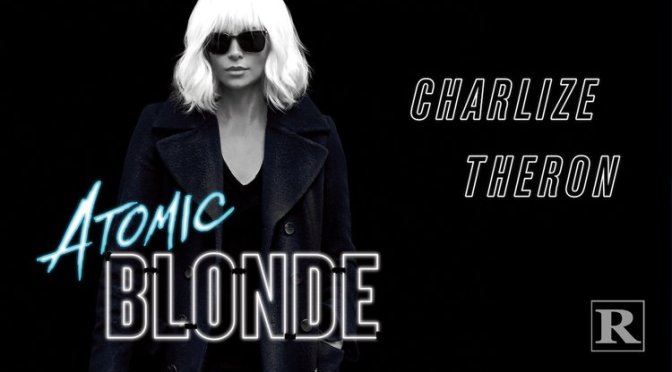 Ever since Mad Max: Fury Road, I felt as though Charlize Theron could really do no wrong at playing a kick-ass, strong female character – as let’s face it, she should have been nominated for that role. With “Atomic Blonde”, it feels as though what I thought is correct. Theron’s character, Lorraine Broughton is a concoction of James Bond shaken (not stirred) with a bit of John Wick and perhaps even a little Bourne as an added twist of sour lemon. That is of course except for the simple fact that she could probably kick all their asses while barely mussing up her hair.

“Atomic Blonde” isn’t all sex and violence, though yes, it’s what drives the film, as there is a story in here, though I will say it’s not the most well written one. It’s a 80’s spy flick turned upside down as it’s lead character takes us on a thriller of a ride, done mostly in flashbacks during an investigation being conducted by Eric Gray (Toby Jones), and our own CIA exec Emmett Kurzfeld (John Goodman), who seem to be trying to work together here..sort of. With some fantastic 80’s fashion and a soundtrack that is in and of itself, it’s own character, as every song fits perfectly into it’s scene and makes a huge impression on the audience by making you want to stand up and dance, but instead, you sit because you’re being transfixed by some crazy fun, fantastic action scenes. 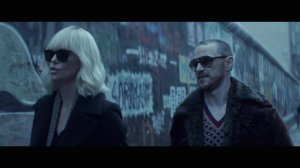 The setup: Lorraine is an undercover MI6 agent sent to Berlin in the days before the Wall comes down to investigate the murder of a fellow agent and recover a important list that asylum seeking agent code-named Spyglass (Eddie Marsan), which contains the names of double agents that’s fallen into the wrong hands of Aleksander Bremovych (Roland Møller). James McAvoy plays David Percival, a fellow agent who’s probably been in Berlin a little too long as he’s clearly running a black market on the side and doesn’t really seem to be on the up and up agent-wise. Berlin is at the point of time where there are protests every day with the East & West sides wanting the downfall of the infamous Berlin Wall that separates them. So of course with all that going on, it’s in a complete state of chaos which predicates the plot here. Things are changing and changing fast with Lorraine being basically sent into an impossible situation, which in order to stay alive, she’s needs to not only be one step ahead, but going to have to fight like hell just to survive and get herself out, let alone fulfill the mission. 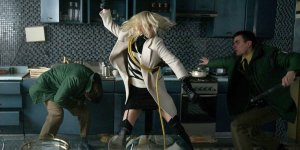 All in all, it’s the action that makes this film and leaves the storyline in the dust, with Theron truly being an “Atomic Blonde”. The acting beyond the action, isn’t really there. Sofia Boutella, whom usually is the one doing all the ass-kicking, is really in her first role here that she doesn’t, and honestly, you could have left her French agent character Delphine Lasalle out and no one would have missed her, unless of course the sex scene between her and Charlize are important to you, but it’s truly not an addition or would it be a subtraction that would be missed to the plot. Lastly, you know how picky I am with accents but I do give a hush-hush wink-wink to Theron’s playing a British one here. 😉